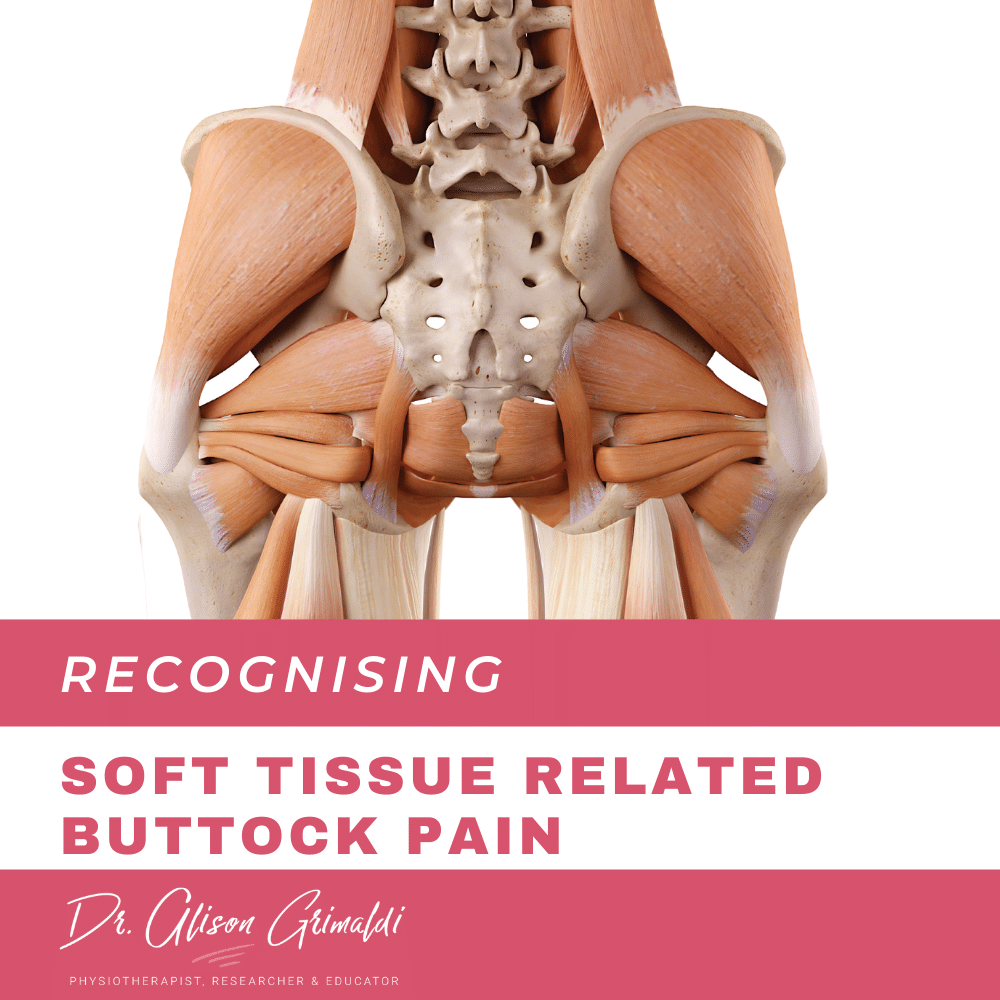 Myofascial structures are obvious sources of nociception in the buttock, which is abundant in muscles, tendons, bursae, ligaments and other fascial structures. The term ‘fascia’ includes all collagen rich structures such as tendons, ligaments, and all the connective tissues that surround and separate our muscles, nerves and organs1. While we are still in the infancy of our understanding of the role of fascia in pain states, it is well innervated, particularly in more superficial fascial sheets and should be considered as a possible source of nociception. 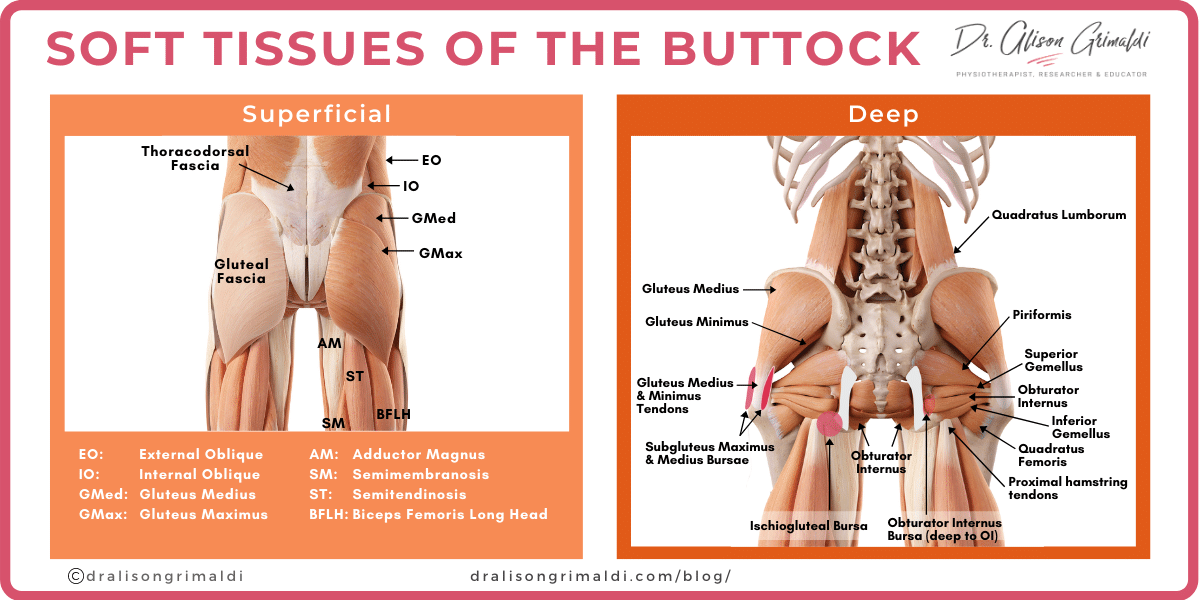 The features below are more specific to muscles and tendons but keep in mind the potential for more diffuse pain and spread of symptoms that might in some cases be related to fascial expansions rather than neurogenic mechanisms such as radicular pain. The research is growing in this field, so further clarity in the role of fascia should emerge over time.

Buttock pain is more likely to be related to muscles or tendons if: 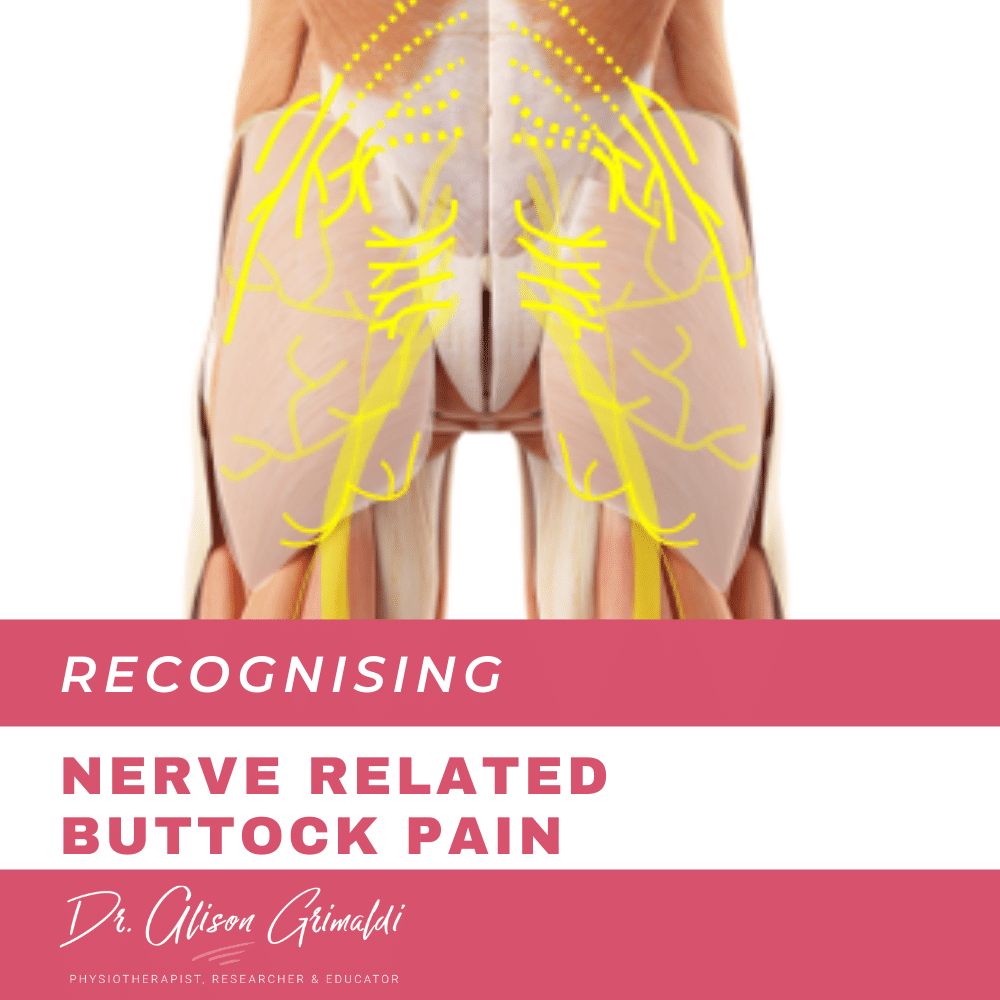 Local nerves running through the buttock can also be responsible for both local and/or remote symptoms. The sciatic nerve is the largest and most recognised source of local nerve related buttock pain. Entrapment or irritation of the sciatic nerve as it passes through the buttock has been given many names, among them the more well recognised piriformis syndrome and deep gluteal syndrome (read more about syndromes of the buttock here).

Unfortunately, such terms are used to encompass myofascial and even referred sources of pain in some cases, doing little to enhance differential diagnosis, clinical reasoning and treatment planning. There are also a multitude of smaller local nerves that provide sensory and motor supply to tissues of the buttock. All of these nerves are capable of producing neuropathic pain. If you haven’t already refreshed your anatomy of the region, you can view the video in Part 1 of this blog to review the deep and superficial nerves of the buttock, but here is a summary graphic below. 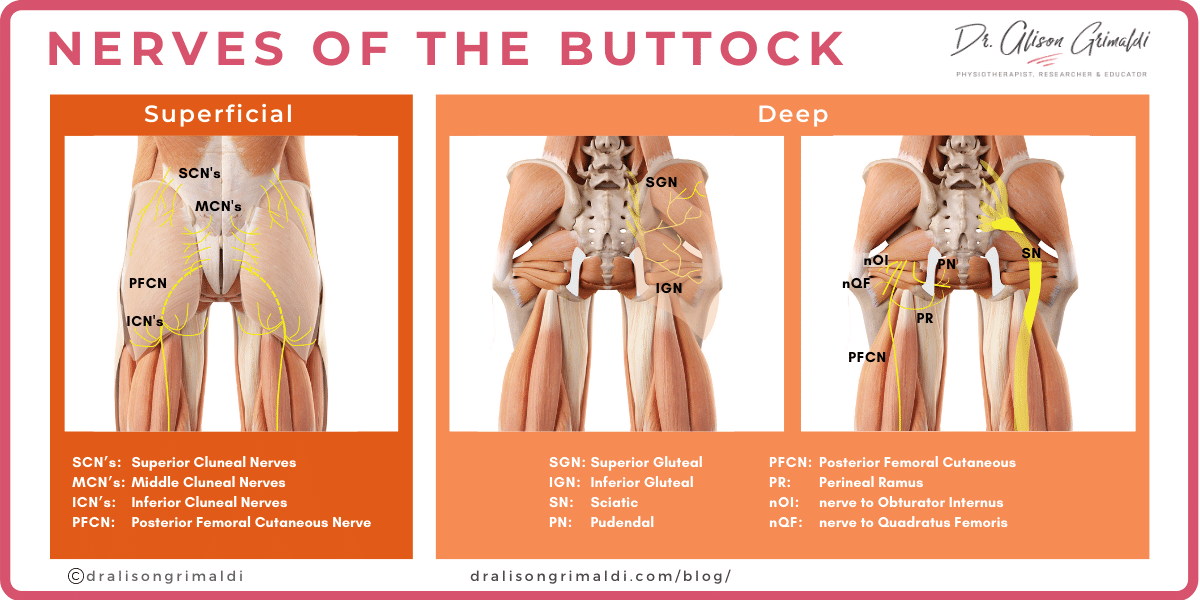 Buttock pain is more likely to be related to local nerves if: 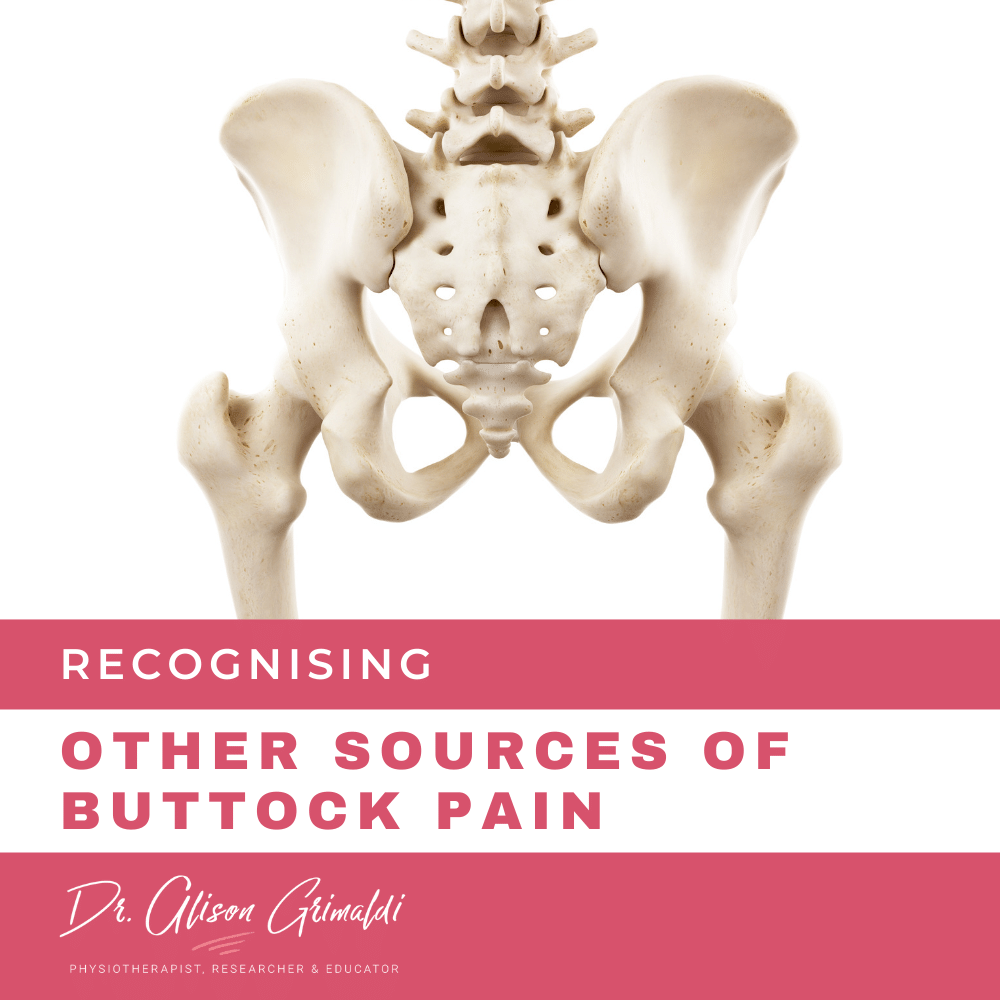 Other Causes of Buttock Pain

While the lumbar spine, SIJ, hip joint, soft tissues and nerves are the most common sources of nociception associated with buttock pain, it is important to be aware of those less common causes. Missing these may have substantial consequences for our patients, so we all need to ensure we listen and assess carefully.

The other musculoskeletal structure within the buttock is of course, bone. Although relatively rare, be aware of the possibility of stress fractures of the pelvis, particularly the sacrum  - commonly misdiagnosed as sacroiliac joint pain, or the ischiopubic ramus.

These will present most commonly as fatigue fractures in endurance runners, particularly females with Relative Energy Deficiency in Sports (RED-S) but can present in either sex, or as insufficiency fractures in older osteoporotic individuals. Onset of pain is usually rapid and significantly impedes activity, but sometimes symptoms may develop slowly and diagnosis can be delayed.

Ischial apophysitis or avulsion injury may occur in adolescents involved in sports with high hamstring loads e.g kicking sports or rapid acceleration. Remember that the ischial growth plates may not fully fuse until 25 years of age, so keep these diagnoses in mind even for athletes in their late teens and early 20's7.

The other adjacent region with potential referral sources is the intra-pelvic space. Pelvic pain is sometimes overlooked but particularly if your patient is female, some extra questioning around cyclical nature of pain, pelvic health and history is well warranted.  Back, sacral and buttock pain are common areas of pelvic organ pain, or linked with prolapse, pain post prolapse surgery and with pelvic floor and related obturator internus dysfunction. Buttock pain may also arise due to either intrapelvic or extrapelvic vascular conditions. Pain associated with vascular structures is usually described as throbbing, pounding or pulsating.

Systemic causes, nociplastic pain states and psychosocial contributors to any pain presentation should always be considered. There are also other processes that cause nociception within musculoskeletal structures, such as malignancy or infection, so questioning around general health is mandatory.

We have focused on nociceptive and neuropathic mechanisms for buttock pain, but I did want to highlight the need for early identification of spondyloarthropathies such as axial spondyloarthopathy and ankylosing spondylitis (AS). There is often substantial delay between onset of symptoms, diagnosis and management of AS, particularly in those who are HLAB27 -ve8. Awareness and screening is key to early diagnosis. Pain onset is usually in the 20's or 30's and patients report back and buttock pain with morning stiffness that lasts more than 30minutes, isn’t eased with rest but improves with activity and anti-inflammatory medication. While this diagnosis might come to mind more readily when assessing a male patient with these symptoms, sometimes it is overlooked in females due to other more common sources of pelvic pain. Make sure you consider this differential diagnosis in any such presentation, regardless of sex.

The last 2 blogs have outlined characteristic patient presentation features of lumbar, SIJ, hip joint, soft tissue and nerve-related buttock pain, and highlighted the importance of screening for other less common causes with potentially high consequences for the individual. Getting a handle on potential causes for buttock pain will assist you in deciding best treatment direction for patients presenting to your clinic, increasing chances of early and optimal outcomes. Next steps, optimising your assessment and management strategies.

Sign up here for the newsletter and receive an infographic covering the key features of all sources discussed in both blogs, to assist you in optimising your differential diagnosis of buttock pain today.

Are you after even more detail about buttock pain conditions, their pathoaetiology, assessment and management? You'll find plenty of evidence-based information and clinical pearls in my Lateral Hip & Buttock Pain course. Or join the video library for access to a growing techniques library of clinical tests and exercises. 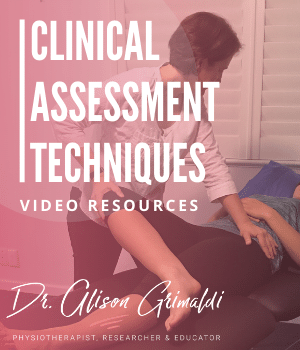 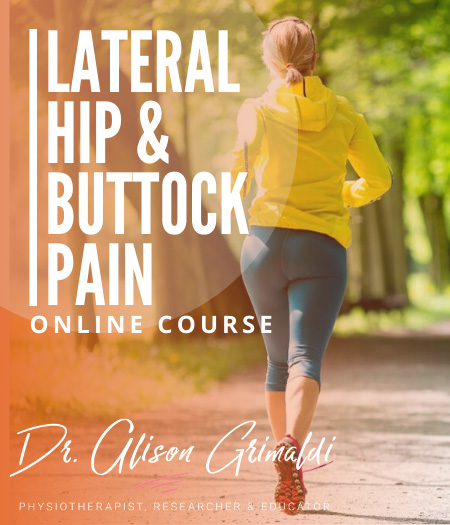 Now out!
Dr Alison Grimaldi on the PhysioNetwork Podcast