Day 8: The 8th of 12 Hip Tips today. Another conversation here about exercise selection for those with hip pain. Don't forget the hip flexors!  Your gift today is another special offer on my Dynamic Stabilisation of the Hip & Pelvis course, where you can learn more about hip flexor function and dysfunction. If you've missed any of the previous hip tips, you can visit the blog listing page here.

Tip #8  Don't forget the hip flexors! Particularly for those with anterior hip pain

So often the focus is on the posterior and/or lateral elements of the muscular support system for the hip. It's rare I see a patient who has had previous physiotherapy for hip pain that has not been prescribed some form of gluteal exercise (too often the clam though :). However, it is very common to hear that there has been no exercise prescribed for the anterior musculature, except perhaps hip flexor stretches. Yes, it's very important to address impairments in gluteus maximus and the hip abductor muscle synergy, but don't forget the hip flexors. This is particularly important for those presenting with anterior hip and groin pain. 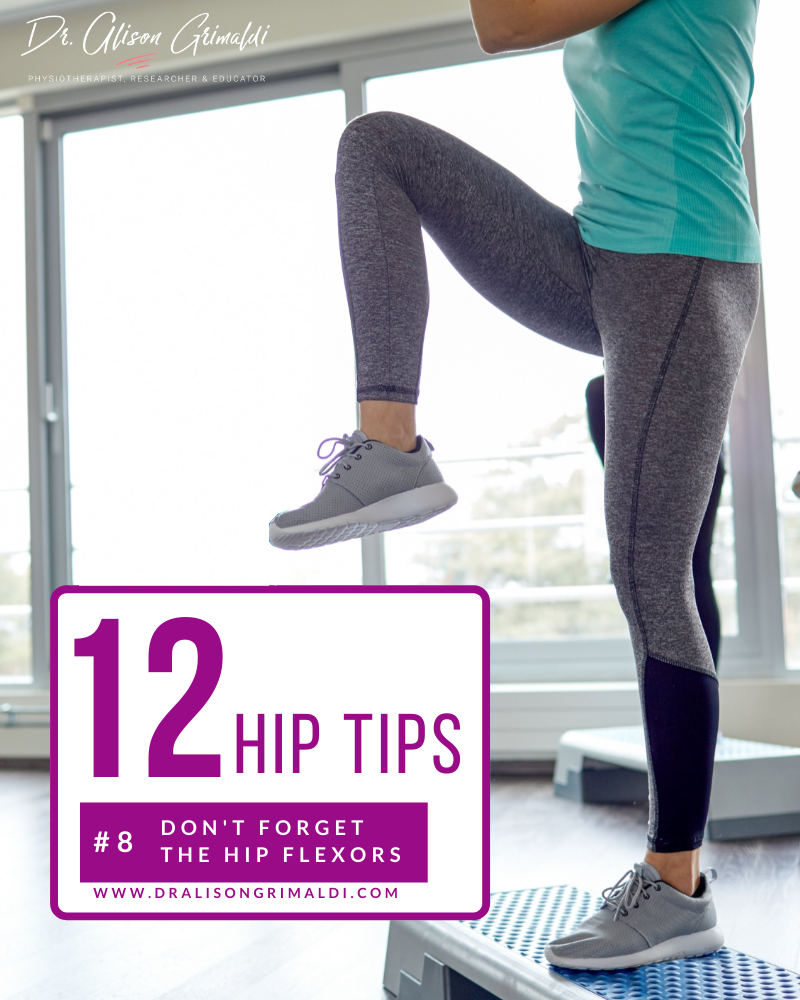 To explore the reasons why, let's step through a little clinical reasoning:

Which part of the gait cycle is usually most provocative in those presenting with anterior hip pain?

The human nervous system and it's ability to innately protect the physical self is amazing, hey?!

Why is this part of the gait cycle so provocative to anterior hip pain presentations?

Shirley Sahrmann and Cara Lewis have done some lovely work to demonstrate the potent effect of hip angle on joint loads in gait. Highest loads are imposed on the anterior joint during hip extension in end stance phase1,2. So potent is this effect that a 2° increase in hip extension angle resulted in an increase in anterior hip joint forces of approximately 20% of body weight! 2. It's no wonder then that patients with anterior joint or hip flexor related pain instinctively avoid this range.

Which muscles provide support for the anterior hip?

The hip flexors! ... and the deep anterior abductor muscles. The iliocapsularis and the gluteus minimus have strong connections onto the anterior capsule and the iliopsoas slings right across the anterior aspect of the head of the femur, together providing critical support for the anterior joint, particularly in challenging positions such as hip extension.

But are the hip flexors impaired? Do they get weak?

Yes and yes! Hip flexor strength in some cases may be the most significant torque reduction for muscles around the hip in end-stage hip OA3. Hip flexor muscle weakness has also been demonstrated in those with femoroacetabular impingement syndrome (FAIS)4 or labral tear5.

So why is exercise therapy for the hip flexors (apart from stretching) often missing in programs for those with anterior hip pain?

Good question! Even before weakness can be detected, we see lots of change in muscle function/shifts in muscle bias within the hip flexor synergy that may render the system less energy efficient and less effective at providing that anterior joint support. Addressing these issues early can be a key component of the exercise strategy for anterior hip and also groin pain. 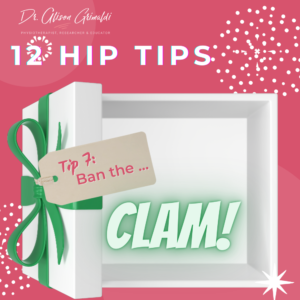 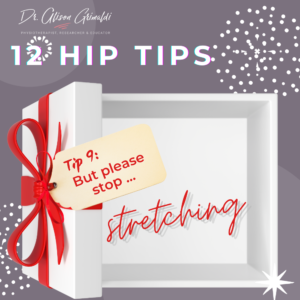 Click on the box above to read Day 7 miniblog

Click on the box above to read Day 9 miniblog