In recent years, particularly in the social media sphere, there has been a lot of negative publicity directed towards management approaches for musculoskeletal pain that address posture and/or incorporate movement training. The criticisms usually hang on two main assertions:
1. Postural and/or movement training will induce hypervigilance and fear avoidant behaviour &
2. That the body is robust and will simply adapt to overcome any loading scenario

I would certainly agree that there are potential adverse effects associated with health and exercise professionals leading people to believe there is only one ‘correct’ posture, or teaching people to consciously maintain some inefficient form of active muscle holding - most commonly an abdominal or gluteal contraction in the context of hip pain presentations. However, we cannot completely ignore the influence of loads encountered during sustained postures or repetitive movements. We are all affected by gravity and how we position our body segments relative to gravitational forces, strongly influences the distribution of loads across our bones, joints and soft tissues. Sustained or repetitive end-range hip postures or movements will result in disproportionately high edge-loading (loading around the outer edge of the joint), and increased loads on the adjacent soft tissues. It’s simple physics really. Whether this disproportionate or excessive load ever results in tissue damage, pain or dysfunction is another matter. In the development of pathology, multiple factors are usually implicated, and different combinations of factors are at play for different individuals. There is also a well-accepted disconnect between pain and pathology.

Although pain and pathology are not well correlated, it does not follow that local pathology and nociception are irrelevant to the management of pain, particularly in the presence of irreversible pathology such as degenerative joint change. Providing targeted load management advice including postural and movement training, using appropriate dialogue does not need to induce hypervigilance but can instead for some individuals lead to rapid changes in pain, function, self-efficacy and quality of life.

As to the assertion that the body is robust and will simply adapt to overcome any loading scenario … there will always be a limit to what the body can adapt to and this limit will vary for each individual. It will depend on many other factors – genetics, morphology, general systemic health, musculoskeletal conditioning, prior injury etc. Commonly attached to the ‘body is robust’ argument is some example of a highly conditioned elite athlete with poor biomechanics. It does not translate that the deconditioned patient in front of us in the clinic, with genetic and morphological predisposition and a history of past injury, should be able to simply ‘adapt’ to adverse loading scenarios induced by their postural or movement strategies.

Load management is now a well-accepted strategy for management of musculoskeletal pain. If the issue is simply a training error – too much too soon – then of course, reducing training load and gradually building up again, allowing time for adaptation is an appropriate solution. However, if the relative overload is underpinned by habitual sustained or repetitive loads which have become part of natural postural and movement patterns or sporting technique, the problem is unlikely to be solved for the longer term by simply unloading and gradually reloading involved structures.

Let’s look at a specific example around the hip. Consider a young woman who presents with anterior hip pain in the context of mild acetabular dysplasia. Her pain is exacerbated by prolonged standing and walking, particularly walking at a fast pace or for more than 30 minutes. She aims to get her 10,000 steps per day, which usually includes a 30-45 minute walk but finds that if she’s been on her feet a lot during the day, her hip aches at night. On examination, you note she stands and walks in relative posterior pelvic tilt and anterior translation of the pelvis (often referred to as ‘sway’ type posture). She is positive on clinical tests for an intra-articular source of nociception.

What effect is this pelvic posture likely to have on our patient's anterior hip structures and hip joint loads?

While some say that standing posture has no relevance to dynamic function, pelvic posture in standing tends to strongly influence hip and pelvic mechanics in gait. I am yet to see someone in clinical practice who stands in a ‘sway’ (posteriorly pelvic tilted) posture and then suddenly flips into anterior pelvic tilt to walk.

How does walking in a sway posture influence kinematics and hip joint loads in gait?

Lewis and Sahrmann1 provided insights here by collecting kinematic and force plate data during walking with different postures. Walking in the swayback posture resulted in a higher peak hip extension angle and a higher hip flexor moment (to resist the higher forces moving into hip extension) compared to natural posture. In previous research, these authors had already established that a 2° increase in hip extension angle resulted in a very meaningful increase in anterior hip joint forces of approximately 20% of body weight 2. Walking in a sway posture, in relative posterior pelvic tilt and anterior translation will therefore be key contributors to greater hip extension and higher anterior hip joint forces. 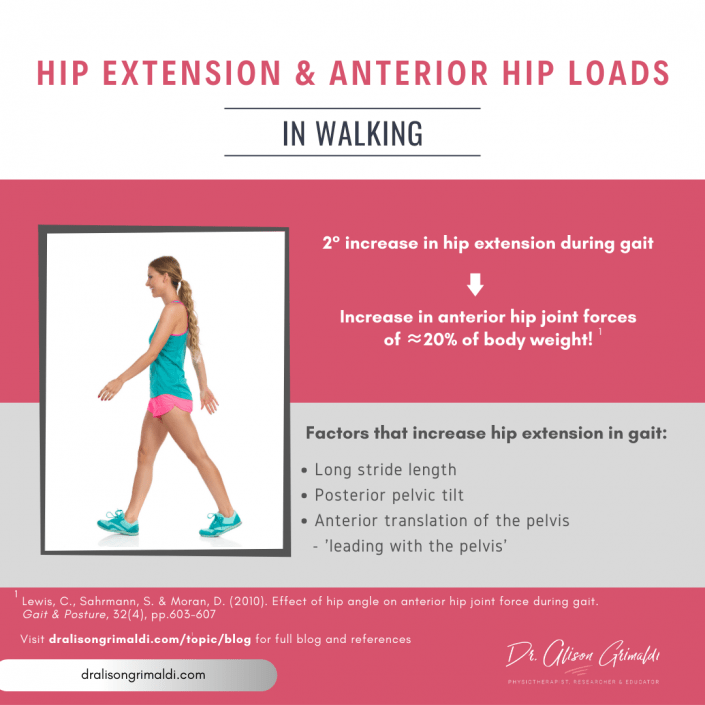 For patients presenting with anterior hip pain who walk with a sway posture and/or excessive hip extension, reducing hip extension by altering pelvic posture and/or stride length can have a marked and immediate effect on pain and function3. It may also be appropriate to provide an exercise program to address muscle impairments and improve dynamic support of the anterior hip. However, if posture and gait patterns are not addressed, long term control of symptoms is less likely to be achieved with targeted exercise alone, particularly as most people will drop off with their exercise program once short-term pain relief is achieved. For appropriately selected individuals, using appropriately selected dialogue and cueing, postural and movement training can have marked and lasting positive effects.