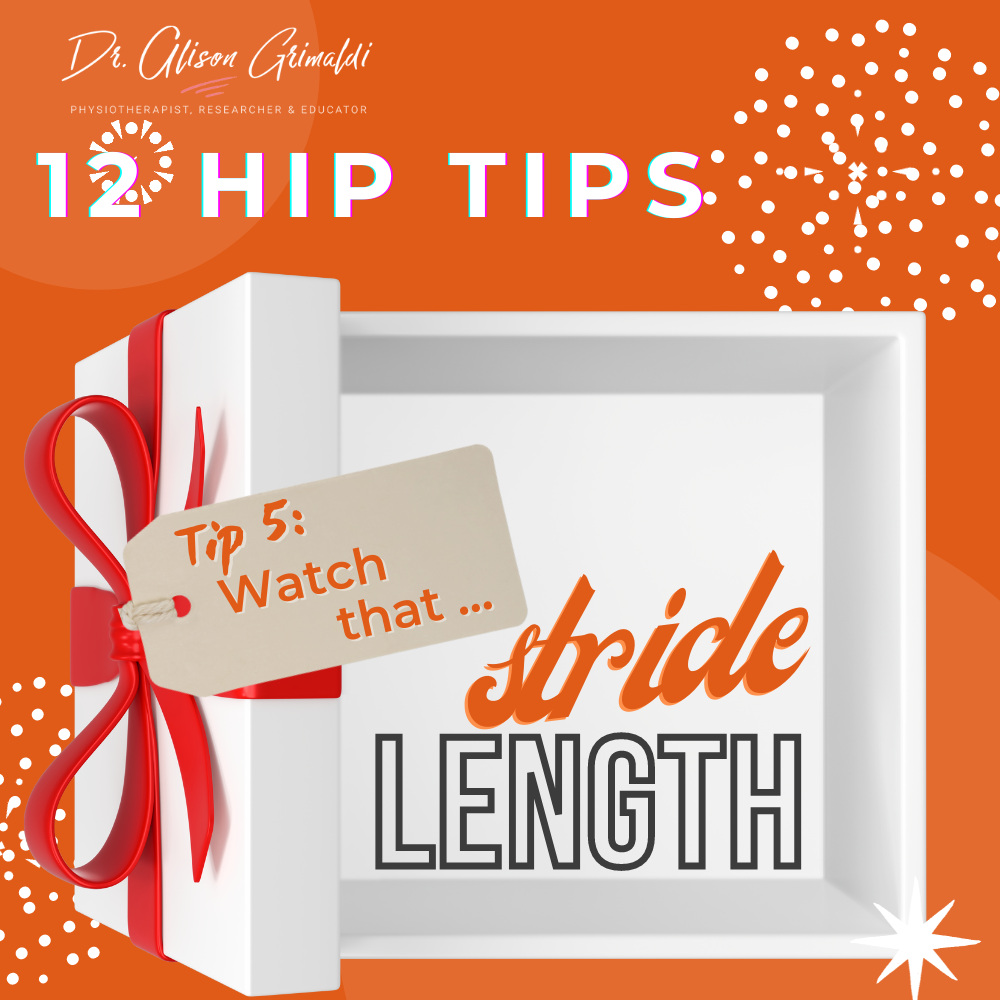 We're heading further into tips for managing hip pain today, on Day 5 of our 12 hip tips. Yesterday we opened a dialogue about posture. Today we'll be strolling through gait. For the first 4 hip tips, you can visit the blog listing page here. And your gift today, a fantastic handout to use in clinic, is brought to you by hippainhelp.com. More on that at the end of this blog.

This tip is so simple and yet highly effective! For anterior hip pain, one of the most potent provocations is overstriding in gait. This is not really surprising considering that researchers have demonstrated that a tiny 2° increase in hip extension angle resulted in a very meaningful increase in anterior hip joint forces of approximately 20% of body weight!1

How often have you seen patients who've developed anterior hip pain after taking up ‘power walking’ or walking with taller/faster walkers? Fast walking with long strides is often worse than running for anterior hip pain, due to the repetitive, forced hip extension. The good news is, simple advice around reducing stride length can often have a rapid and marked impact on pain.

Overstriding in running may also irritate the anterior hip but the effect is often greater at the lateral and posterior hip, in association with the higher braking forces incurred when impacting the ground further in front of the body (and the hip). Changing cadence is a simple way to alter a whole host of things.

Increasing cadence by 10%, has been shown to reduce:

Changing cadence however is only appropriate when cadence is low.  For example, increasing cadence from 150 to 165 steps per minute (counting both legs), could have a significant positive effect on hip pain related to impact loads. But if a runner is already running at >170 steps per minute, this is less likely to be a primary focus. Remember that when changing anything in running, it needs to be done gradually to avoid unintended overload elsewhere, such as the foot and ankle.

Useful cues to reduce hip loads and hip pain in walking and running:

It goes without saying that you should always check the effects of your cues - watch your patient walk or run with the cue in mind and see if it accomplishes what you're after. If not, try another cue! Different cues work for different people, as I'm sure you've all found.

Today’s gift is a special resource brought to you by www.hippainhelp.com

Hip Pain Help is a hub that connects those with hip pain with high-quality information and a growing multi-disciplinary, international community of health professionals with a special interest in the management of hip, pelvic and groin pain (Hip Pain Professionals). I am a founder of this site, together with my Australian physiotherapy colleague, Kirsty McNab.

This site aims to put people with hip pain in touch with some high-quality information and health professionals who can help. If you have an interest in hips, we would like to put our visitors in touch with you via a directory listing. We also have a private facebook group where we discuss papers, cases and topical hip-related matters. If you have an interest in hips, join our community here.

Your Day 5 gift is a patient education resource

3 Simple Strategies to Reduce Hip Pain in Walking and Running

High-quality patient information resources are time consuming to develop.  We've done the work for our Hip Pain Professionals and this Christmas, we'd like to share this resource with you.

That's Day 5 of my 12 Hip Tips wrapped up! Tomorrow I have a product recommendation for you. Something we've found invaluable for our patients with hip pain.  You might like to bookmark the blog page to drop back and visit easily. See you on Day 6! 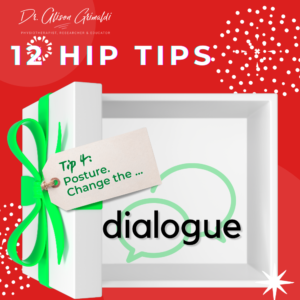 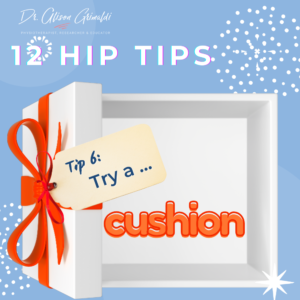 Click on the box above to read Day 4 miniblog

Click on the box above to read Day 6 miniblog