In last month’s blog, I discussed 3 of my least favourite Pilates exercises for patients with hip pain. This month I’ll be focusing on 3 yoga poses to modify for hip pain. These are not exercises I dislike, in fact there is a lot of value in these 3 weightbearing exercises. However, the execution of these poses can make all the difference between a helpful activity and a provocative activity for those with certain painful hip pathologies. Today we’ll look at who might be provoked by these yoga poses and why, as well as how we can modify these 3 yoga poses for patients with hip pain.

This blog contains a free downloadable resource. Read to the bottom to claim your gift.

Yoga is an ancient form of exercise, originating in India thousands of years ago. The practice of yoga spread to Western civilisation in the late 1800’s and its popularity has continued to grow ever since.1 Many benefits of yoga have been cited, including increased strength and flexibility, improved sleep, reduced stress and increased relaxation.2 Yoga has also been reported to assist in managing pain in musculoskeletal conditions, even in older individuals.3

However, although yoga is a non-contact, low-impact physical activity, it is certainly not benign. Musculoskeletal injuries occur regularly, and this is likely related to the yoga asana or postures exposing muscles, joints and bones (particularly spinal vertebrae in those with low bone mineral density) to the edges of their physiological competence.

These last 3 points all have a common theme – yoga injuries are more likely to occur when people push to their limits and not surprisingly, this is more likely to occur within a group class. Others refer to ‘ego-driven’ injuries, where students injure themselves when they are tempted or encouraged to keep up with others in a group environment.4

I recall one of my own patients mentioning that the best yoga class she ever did was a class where the teacher instructed everyone to keep their eyes closed. She said this took all the competition and pressure away, and she could just relax and do what she felt was comfortable for her own body. Not that I’m suggesting that people should always practice yoga with their eyes closed! But avoiding any natural competitive tendencies and working within an individual’s own limits is critical for the best risk-benefit balance in yoga practice.

For those with hip pain, there are a number of yoga poses that are quite challenging and can be provocative. One study on yoga practitioners with femoroacetabular syndrome, reported that 71% had to stop practicing yoga because of hip related symptoms, but 93% managed to return to yoga at around 5 months post hip arthroscopy.5

In this blog, we’ll be looking at 3 yoga poses to modify for hip pain, and how health and exercise professionals can provide specific load management advice for these poses, to reduce loads at the hip through simple alterations in position.

No. 1 Yoga Pose to Modify for Hip Pain: Warrior Pose

The warrior pose has 3 main variations. Warrior I, with arms extended overhead with trunk extension as pictured below and Warrior II, with arms held in 90 degrees abduction, are the 2 versions that may not be well tolerated by some people with hip pain. 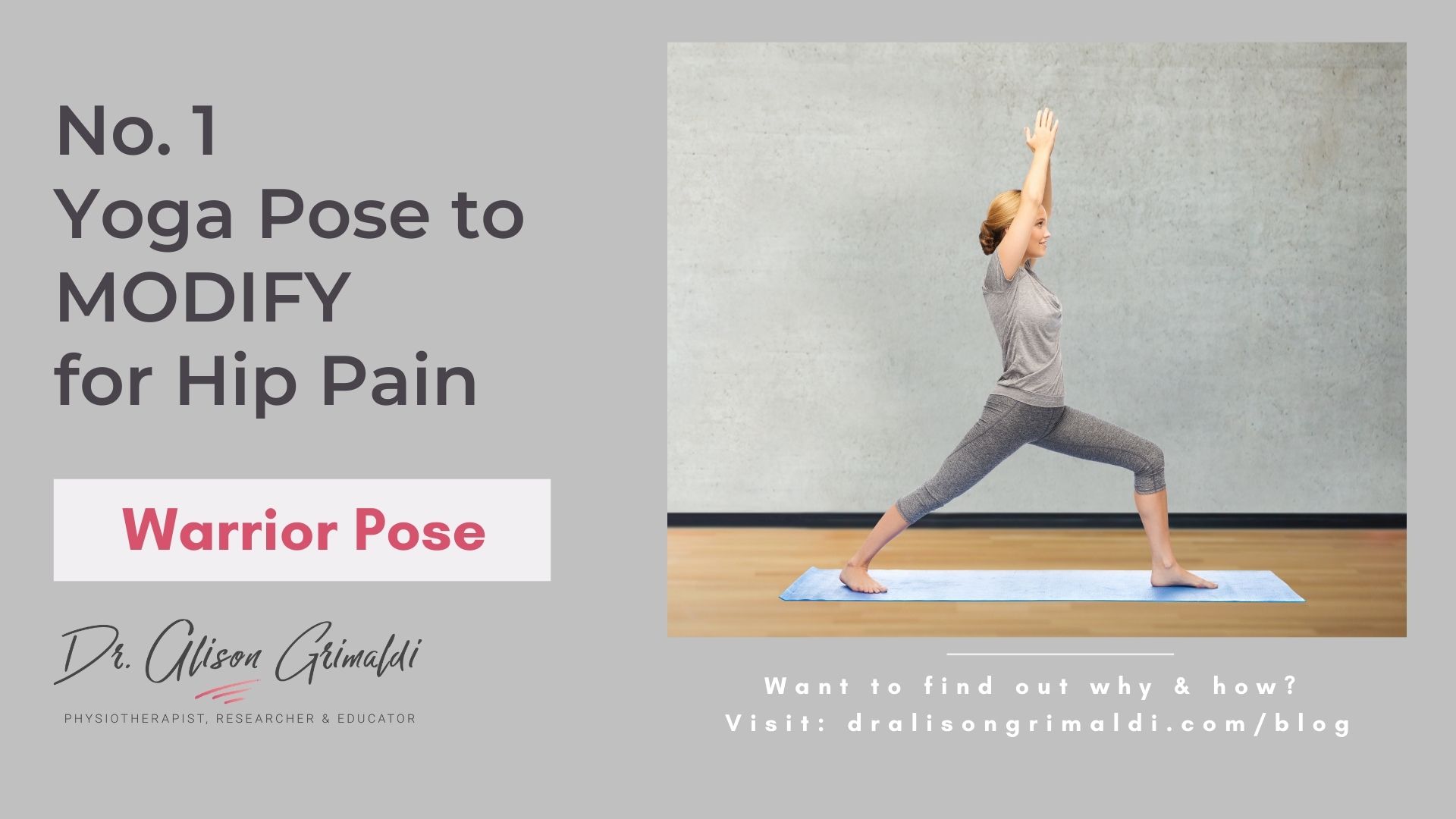 End range extension of the back hip in this pose places large loads on the anterior joint structures and hip flexors. The combination of extension and external rotation of the back hip places even greater loads on the anterior capsuloligamentous structures. Particularly if the individual has inadequate local stability mechanisms, excessive anterior shear of the femoral head within the acetabulum may occur. This increases pressure on the anterosuperior chondral surfaces, the labrum and chondrolabral junction and the capsule.

With the iliopsoas at its maximal length and actively contracted, the psoas tendon may strongly impinge against the adjacent anterior labrum and the femoral head. If there is already painful pathology of the labrum, such forces particularly when sustained, are likely to provoke hip pain. If the patient has painful iliopsoas tendon pathology, the sustained compression as it wraps around the femoral like a fulcrum, can also be provocative.

Those most likely to be at highest risk of injury or pain exacerbation from sustaining such a position are individuals with excessive femoral anteversion and/or reduced anterior stability – acetabular dysplasia, hypermobility spectrum disorders or hypermobile EDS, labral insufficiency or focal capsuloligamentous incompetence related to an injury, overstretching or surgery (hip arthroscopy or anterior approach total hip replacement).

Weightbearing squats and lunges can be very beneficial for conditioning of the lower limb musculature, so rather than avoiding this pose, simple cues can substantially reduce the load on the hip structures while maintaining the physical and mental benefits of the pose.

The health professional should ask the patient to perform the pose under their supervision, take careful note of hip and pelvic position and modify form to minimise any provocative loads on the hip.

No. 2 Yoga Pose to Modify for Hip Pain: Tree Pose

The Tree Pose is once again a useful weightbearing stimulus for hip musculature, but how the technique is performed may shift the risk-reward scales more towards risk than reward. The Tree Pose involves sustaining a single leg stance position with the other foot resting above the medial thigh and the non-weightbearing hip held in end-range horizontal abduction-external rotation (see picture below). 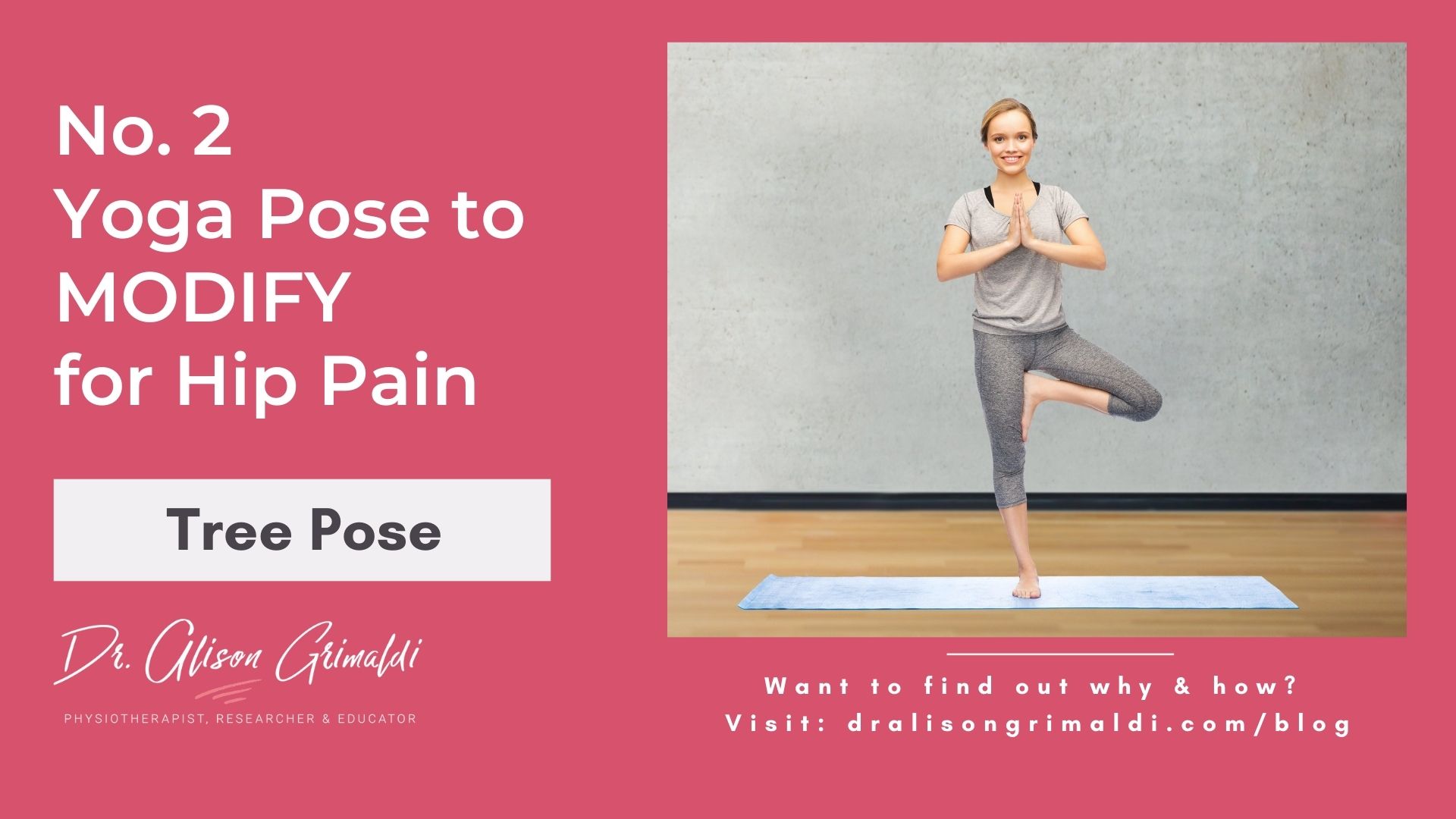 Exacerbation of hip pain on the weightbearing side in Tree Pose

On the weightbearing side, the position of the pelvis on the femur will have a critical influence on joint and tendon loads. For example, if the pelvis translates forward excessively relative to the base of support at the foot and/or posteriorly tilts excessively, the hip will once again be in a position of sustained extension, potentially giving rise to similar anterior joint related pain as discussed above.

In the coronal or frontal plane, if the pelvis shifts laterally excessively and/or sinks into excessive lateral pelvic tilt (contralateral drop), patients with gluteal tendinopathy may find their lateral hip pain is exacerbated due to the higher compressive loads at the greater trochanter.  Those with lateral rim pathology of the hip joint might also find their ‘c-sign’ joint-related pain is exacerbated, particularly those with acetabular dysplasia where this position is likely to significantly increase labral loading.

Although the non-weightbearing side is not absorbing bodyweight, the enthusiasm with which the knee is pushed back, opening the hip, may influence hip loads on that side. In forced hip abduction and external rotation, the anterior joint structures will again be loaded, although not to the same extreme as the Warrior Pose usually. However, for someone with excessive femoral anteversion, forcing their painful hip into this position may be very provocative.

Impingement may also occur posteriorly but in this flexion-abduction-external rotation position the most likely impingement is an extra-articular impingement of the greater trochanter against the ischium, which may also impinge the sciatic nerve.

Single leg hip-hitch type exercises have been shown to be a great stimulus for the gluteus medius muscle and by achieving a slight hip hitch, greater lateral coverage of the femoral head will occur, reducing rim loading laterally. Cues to reduce excessive pelvic translation and tilting can reduce provocation and increase reward from this exercise.

For those who don’t have adequate capacity to control their pelvic position:

The Twisted Lunge Pose or Revolved Lunge Post involves sustaining a lunge position but with the trunk inclined forward bringing the front hip into often full flexion (see picture below). Then the trunk is rotated towards the front thigh and the pelvis follows, increasing relative hip internal rotation and often adduction. 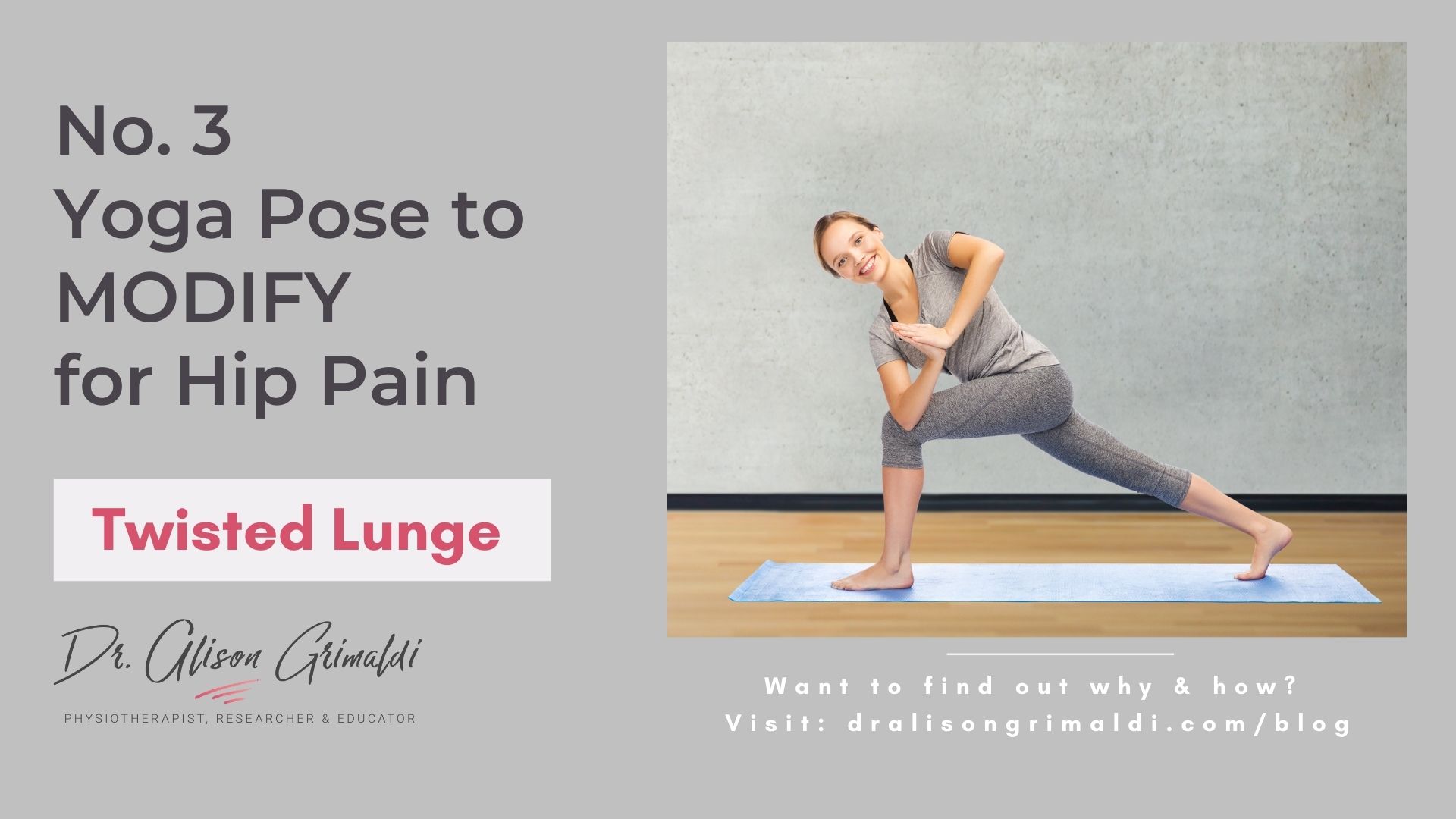 Exacerbation of anterior hip pain in the Twisted Lunge Pose

This position– flexion/adduction/internal rotation - you will recognise as a position of anterior femoroacetabular impingement. For patients with anterior chondrolabral pathology and particularly for those with cam morphology and femoroacetabular impingement syndrome, sustaining such a position, or repetitively rotating the pelvis in that deeply flexed position may provoke symptoms.

Exacerbation of posterior hip pain in the Twisted Lunge Pose

For most people this is not much of an issue, as the deep posterior acetabulum provides excellent posterior stability for the joint. However, for those with femoral retroversion, reduced bony coverage posteriorly (acetabular dysplasia/acetabular retroversion) and/or a lack of adequate posterior capsuloligamentous integrity (hypermobility or iatrogenic after posterior approach total hip replacement), this position may place the posterior joint at risk.

I hope you found this information helpful. If you would like some further graphics demonstrating ways to modify these poses, and a summary of the key information from this blog, I have prepared a downloadable full colour resource for those of you who are keen to join our mailing list for monthly updates.
Hip Academy members - no need to sign up, this resource will be provided to you within your Hip Academy PDF Resource Library.