This blog explores the journey of developing a program for gluteal tendinopathy management, that was subsequently used in a successful randomised clinical trial. In my clinical practice, I had noticed that we were treating many with lateral hip pain, most commonly post-menopausal women. These patients reported pain levels and impacts on their lives as marked as those with hip osteoarthritis. Their sleep and physical activity levels were substantially affected and together with the psychological distress caused by more severe presentations, the impact on general health and quality of life was marked. Long symptom duration, with delayed or mis-diagnosis was frequently reported, sometimes resulting in unnecessary interventions. Those identified as having a local soft tissue pathology had usually been diagnosed with trochanteric bursitis and given a corticosteroid injection (CSI) as the first line medical treatment and bursectomy for those with pain that did not settle. Previous failed physiotherapy had commonly included passive therapies such as therapeutic ultrasound to the ‘inflamed bursa’ and stretches for the iliotibial band or buttock.

Turning to the contemporary literature, imaging and surgical studies noted that the primary problem was tendinopathy of the gluteus medius and or minimus tendons, with bursal enlargement a less consistent feature. Imaging research suggested that gluteal muscle atrophy was associated with gluteal tendinopathy but little else had been established regarding the associated physical impairments and therefore the most appropriate targets for physical therapy. My clinical observations were that patients presenting to clinic, appeared to have weak abductor muscles and poor motion control in the frontal plane during gait and other activities involving single leg stance. I was very fortunate to be able to collaborate with research teams from the University of Queensland (Bill Vicenzino and Paul Hodges) and the University of Melbourne (Kim Bennell), resulting in the development of seminal work on impairments related to this condition through Kim Allison’s PhD studies. Her laboratory studies demonstrated that, compared to people without pain, those with unilateral gluteal tendinopathy were weaker in abduction on both sides, but moreso on the painful hip (Allison et al 2016a). Additional kinematic, kinetic and electromyography studies (studies of movement, forces and muscle activity) showed that those with painful gluteal tendinopathy were more likely to move in ways that result in higher loads on the gluteal tendons, primarily driven by alterations in frontal plane kinematics (pelvic drop, side shift and trunk lean to side) and a change in the way the hip abductor muscles activate during movement (Allison et al 2016 b,c; 2018).

In addition to these laboratory studies of impairments, there was an anatomical study that showed the soft tissues of the greater trochanter are compressed by the iliotibial band in a position of hip adduction (Birnbaum et al 2004). This indicated that postures, activities or exercises that encouraged this position are likely counterproductive in resolving the condition. While some believed that tightness of the ITB was a primary problem and stretches were prescribed, there was no research to be found in support. To the contrary, I found that improvements occurred when patients avoided or minimised such stretches and prolonged postures or activities in hip adduction. This became a key component of my education strategy for load management in the development of the program for gluteal tendinopathy management.

We recently reported the results of a large, multicentre randomised clinical trial that showed an education on load management in combination with an exercise program was superior to a corticosteroid injection or adopting a wait and see policy. The beneficial effects of the education and exercise program can be seen in the paper's infographic below, which shows the benefit was present over the 12 months follow up period of the study. It has recently been published in the high ranking British Medical Journal. Again, this was a collaboration with the academics at the Universities of Queensland and Melbourne. 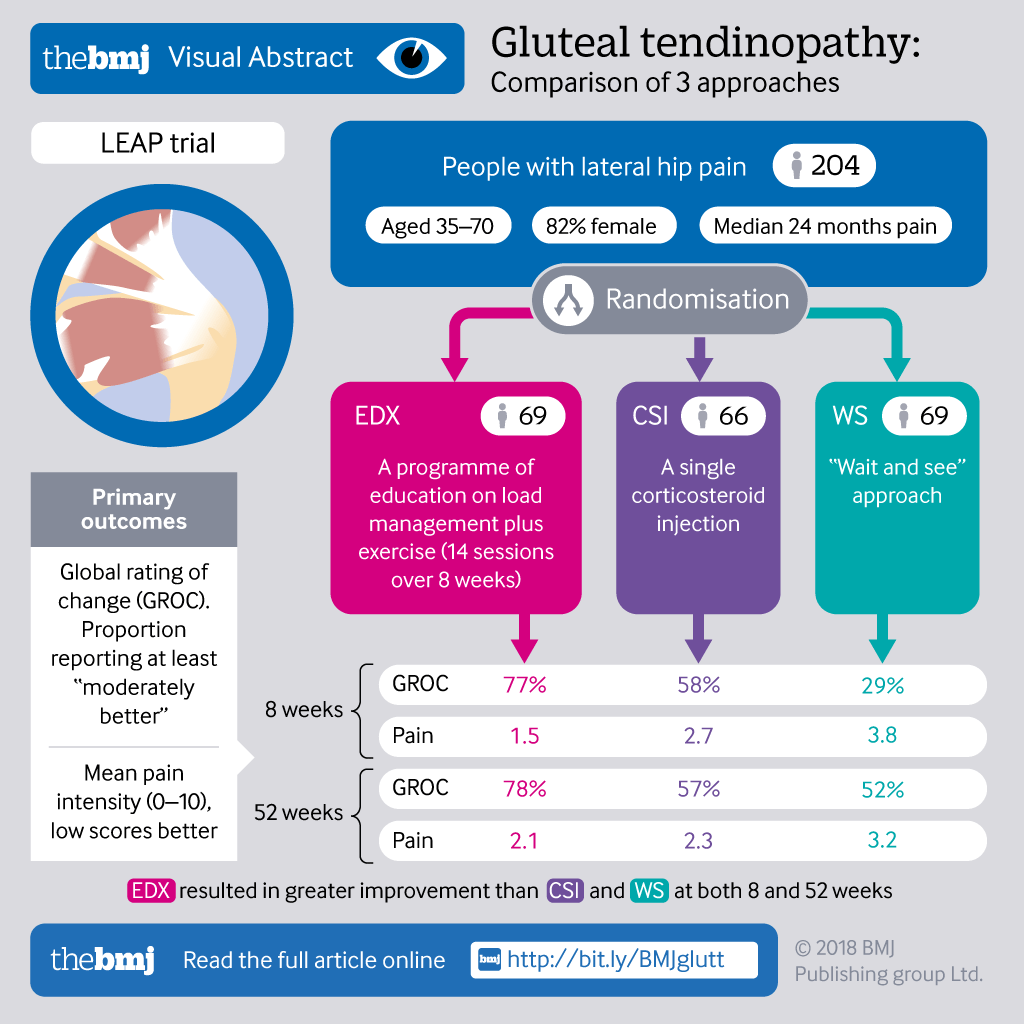 These beneficial effects of education and exercise delivered by a physiotherapist hold great promise for the many who endure the pain of gluteal tendinopathy. The important next step is to spread the news of these positive findings so that sufferers can benefit.

Acknowledgements
Thank you to all involved in the massive undertaking of this multicentre, randomised clinical trial. In particular, I would like to thank Professor Bill Vicenzino, for taking what started as a biologically plausible clinical approach, challenging any clinical bias within and developing a rigorous framework to test a clinical hypothesis via a high-quality research trial. Thank you also to Professors Paul Hodges and Kim Bennell, whose expertise and extensive experience in high-quality research was invaluable in this process. 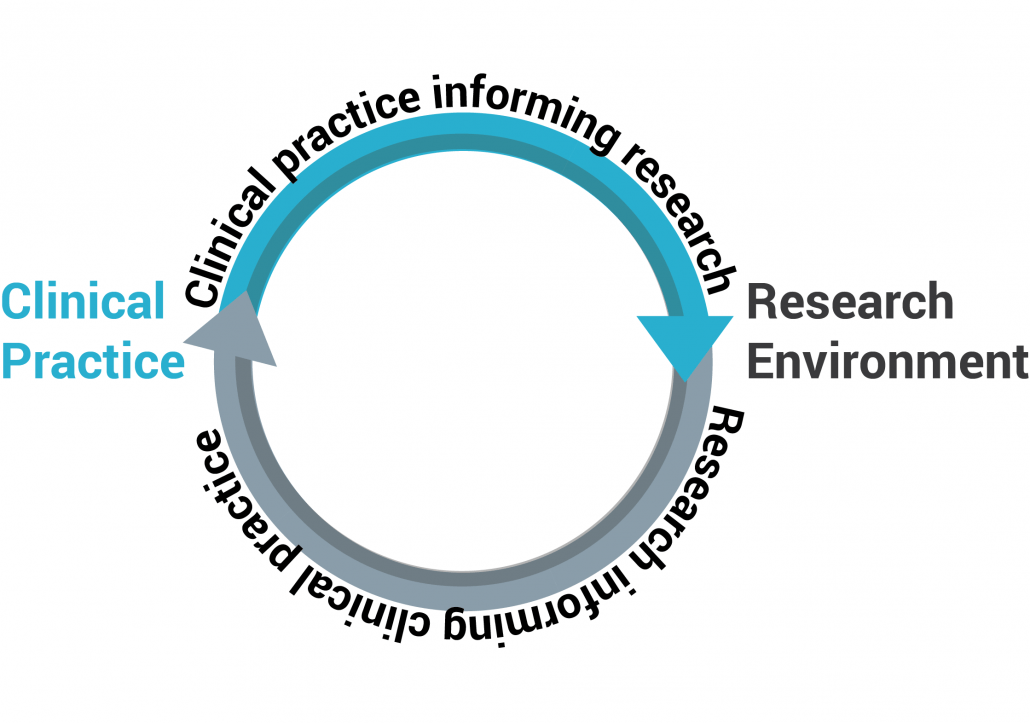 I would also encourage readers to look closely at the flow-chart presented within our paper to appreciate the process involved in a large randomised controlled trial. Between them, Dr Rebecca Mellor and Philippa Nicolson performed 1691 phone-screen interviews and 421 physical screening assessments, collated all data, and kept in contact with 204 trial participants to ensure an absolute minimum in participant withdrawal or missing follow-up data. What an accomplishment! Thank you to you both for an amazing job.

This trial would also not have been possible without the assistance of many skilled physiotherapists from 14 clinics across Brisbane and Melbourne who underwent training in the Education and Exercise approach and delivered the physiotherapy intervention in a highly professional and successful manner. Thank you and I hope you and your clinics have found the experience a rewarding one.

Finally, but most importantly, I would like to thank all the participants of the LEAP trial for their involvement and compliance with the randomisation process, the exercise program and the return of many questionnaires. In the Education and Exercise group, we recorded a compliance rate of approximately 90% for the home exercise program, over and above the twice weekly supervised exercise. I recommend reading the accompanying BMJ Opinion Piece ‘ The ongoing reduction in pain became the inspiration to never go back to “ground zero”’ which includes the perspective of one of the trial participants who found motivation to exercise in the rapid change in symptoms she experienced. It also includes valuable feedback from one of our trial physiotherapists.

If you don’t yet have a copy of the papers, they are open access and can be found here:
Outcomes paper – don’t forget to pick up the supplement

If you'd like to learn more about tendinopathies of the hip & pelvis, sign up for my online learning course on this topic or join the mailing list for updates on new resources and practical workshops

References   - Visit my publications page for free resources and links