This is the final instalment of my 3-blog series focusing on modifying common gym exercises for hip pain. So far, we have covered the Rearfoot Elevated Split Squat and Deadlifts. Our final gym exercise to discuss is the leg press, a regular constituent of many individual gym programs and group circuits. While a great stimulus for the glutes, this exercise can be challenging and highly provocative for many with hip pain. If your patient is reporting hip pain during leg press or after their gym sessions, it would be wise to take a close look at exactly what exercises, technique and equipment they are using. Hip pain with leg press (or after leg press) is common. Read on to find out why and how to modify leg press for hip pain.

Leg press is a machine-based exercise that involves pushing through the feet to perform an extension task, usually from a position of deep hip and knee flexion. Leg press can be a great compound exercise for lower limb extensor strengthening, but the choice of equipment and positioning determines range of hip flexion and profoundly impacts hip loads. For those with hip pain, equipment selection, technique and other exercise parameters will affect the risk-benefit profile of the leg press exercise. Even in those without pain, leg press poses some risks for those with certain morphologies. Being aware of these morphologies, particularly in our younger athletes, and preventatively modifying leg press may reduce the risks of hip injury and pain.

The most provocative form of leg press is usually the incline leg press, due to the extremes of flexion range through which the hip joint translates. Even with the knee extended, the hip is at 90° flexion and then translates to terminal flexion at the other end of the movement cycle.

What’s so bad about terminal hip flexion? Of course, there is usually no problem at all with moving your joints through their full range. That’s what they were designed to do. It’s when usual loads are amplified by high force, speed or volume (repetitions, duration, frequency) that extremes of range may take their toll. For those with hip pain and/or bony shape that alters terminal range, pain exacerbation or injury may occur.

Hip flexion is usually limited by the natural phenomenon of bony impingement i.e., at end of range, the further movement of the femur is limited, most commonly by intra-articular mechanisms where the head-neck junction contacts the anterior acetabular rim, or vice-versa. Sometimes the impingement is extra-articular, where the Anterior Inferior Iliac Spine or subspine region contacts the femoral neck. Soft tissue tension or soft tissue apposition can also limit hip range but the dominant limiter for hip flexion is bony for most people.

Because the labrum lines the acetabular rim, when end-range impingement occurs, those with anterior hip pain associated with anterior labral pathology may experience pain exacerbation. Given enough intensity or volume of this provocative activity, the joint may respond with inflammatory synovitis and/or in some cases labral pathology may progress.

For those with cam morphology, defined as an alpha angle of more than 60°, where the femoral head-neck junction is thicker, the femur will reach the acetabulum earlier. If terminal range is forced, the thickened junction is pushed into the acetabulum, placing shearing loads across the chondrolabral junction and the rim cartilage.  This mechanism is believed to underpin the increased risk of hip pathology in those with cam morphology, with larger alpha angles linked with higher risks of chondral pathology1 and of developing hip osteoarthritis.2

Many people with cam or pincer FAI may reach the end of their pure flexion range in the sagittal plane at less than 90°. If we accept that forcing joint range past physiological limits may increase risk of pain or injury, then it stands to reason that trying to perform a leg press action that moves between 90° and terminal flexion with external load, may not be the ideal exercise choice. An important point for most leg press machines is that the load is usually accepted and released in the position of maximal flexion - i.e., to complete the exercise and rest or remove the feet, there is a certain distance the plate has to travel to release the load. So if a person only has 90° of hip flexion or less and the requirement to return the plate to the 'rest' position is 120° of flexion - force has to go somewhere - the head of the femur is forced into the joint and/or the pelvis needs to posteriorly rotate. Also, when starting each set, the initial inertia must be overcome in a position of deep flexion so there will be high muscle forces at play in this challenging hip position. Compare this to a hack squat or Smith squat, where the range of flexion can easily be controlled and the start and end of the repetition is in a less challenging extended hip position.

If you are treating a patient with FAIS who is attending a gym, or performing supervised exercise with gym equipment in your own facility, modifying technique or exercise may be warranted. There is also a consideration for pre-emptively protecting individuals from hip pain or injury - particularly our younger athletes with cam morphology.  I have seen a number of adolescent males in clinic who have sustained large, acute labral tears in the gym, usually those who have started a gym program for sports conditioning in the later years of high school. The common assessment feature has been a clinical finding of early bony restriction of hip flexion, suggestive of cam or pincer morphology. There remains a large question mark over whether pre-season screening has any value in terms of reducing injury risk. However, clinical screening for bony variations that have great potential to impact on joint loads and health (such as cam morphology and femoral malversion) may be warranted in our adolescent athletes embarking on a gym program. Exercise type, technique and equipment selection should be optimised for each individual.

In the case of AIIS or subspine impingement, soft tissues can be impinged between the neck of the femur and a prominent AIIS or sometimes the bone just beneath the AIIS may also be prominent. This may be related to acetabular retroversion, apophyseal traction or avulsion, capsular traction on the subspine region or osteotomy. For some people, extra-articular impingement may become painful, in which case hip pain during leg press may be related to high ranges of hip flexion. 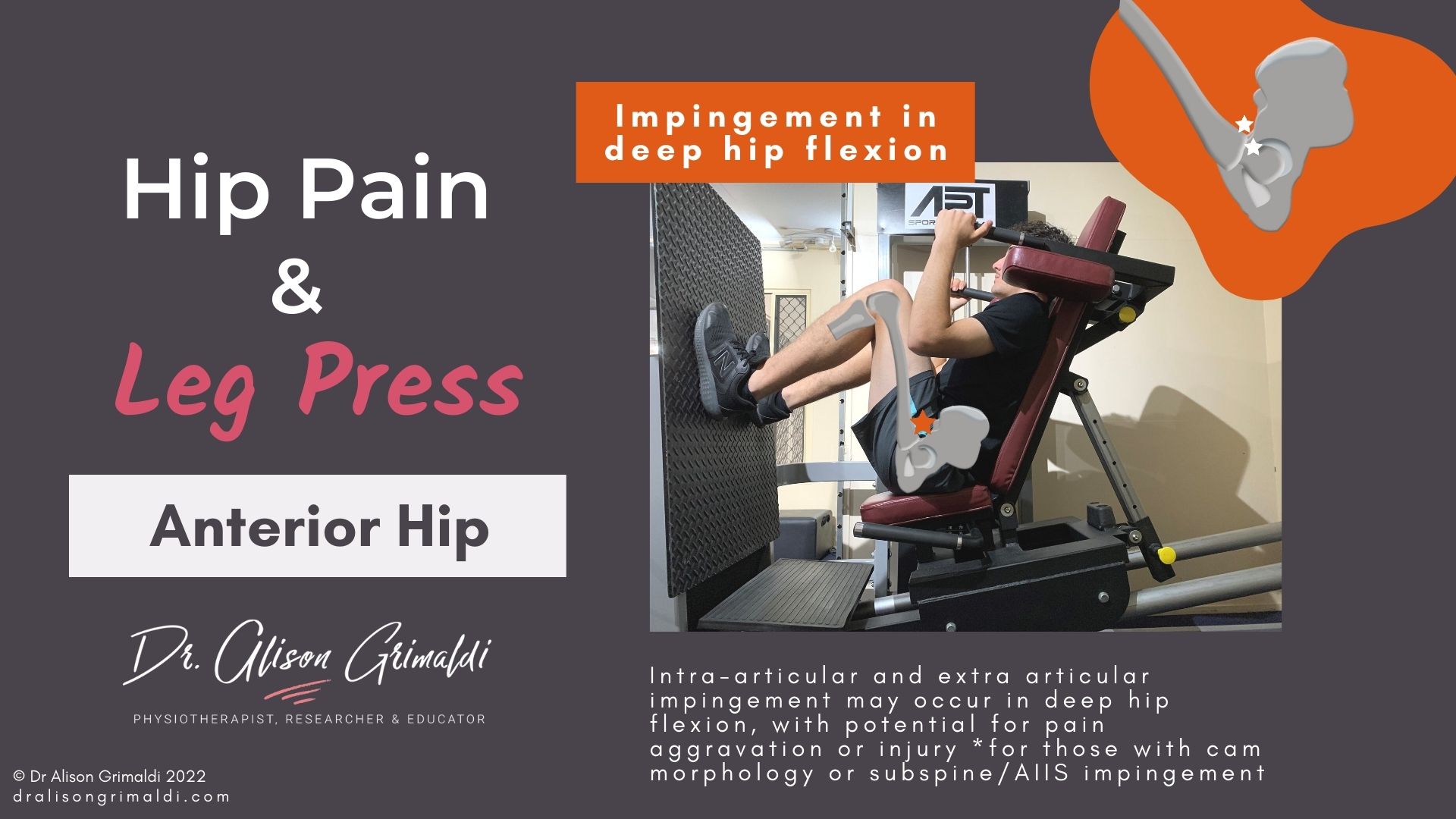 Posterior hip pain may also be exacerbated by leg press, again particularly during the incline leg press. When the bony endpoint of hip flexion range is reached, if further flexion force is applied across the joint, the point of bony impingement anteriorly serves as a fulcrum to distract the posterior aspect of the joint. In certain situations, this may result in a risk of posterior subluxation or dislocation of the femoral head. Posterior instability and dislocation at end-range flexion is more likely in those with femoral retroversion or FAI,3,4 reduced bony coverage posteriorly (acetabular dysplasia/acetabular retroversion) and/or a lack of adequate posterior capsuloligamentous integrity (hypermobility or iatrogenic after posterior approach total hip replacement).

Posterior hip pain may develop in relation to articular overload or the secondary self-protection response – overload of the deep external rotators as they attempt to protect the posterior hip. The high levels of deep rotator activity may subsequently result in irritation of the adjacent sciatic nerve, giving rise to or provoking the symptoms of deep gluteal syndrome. 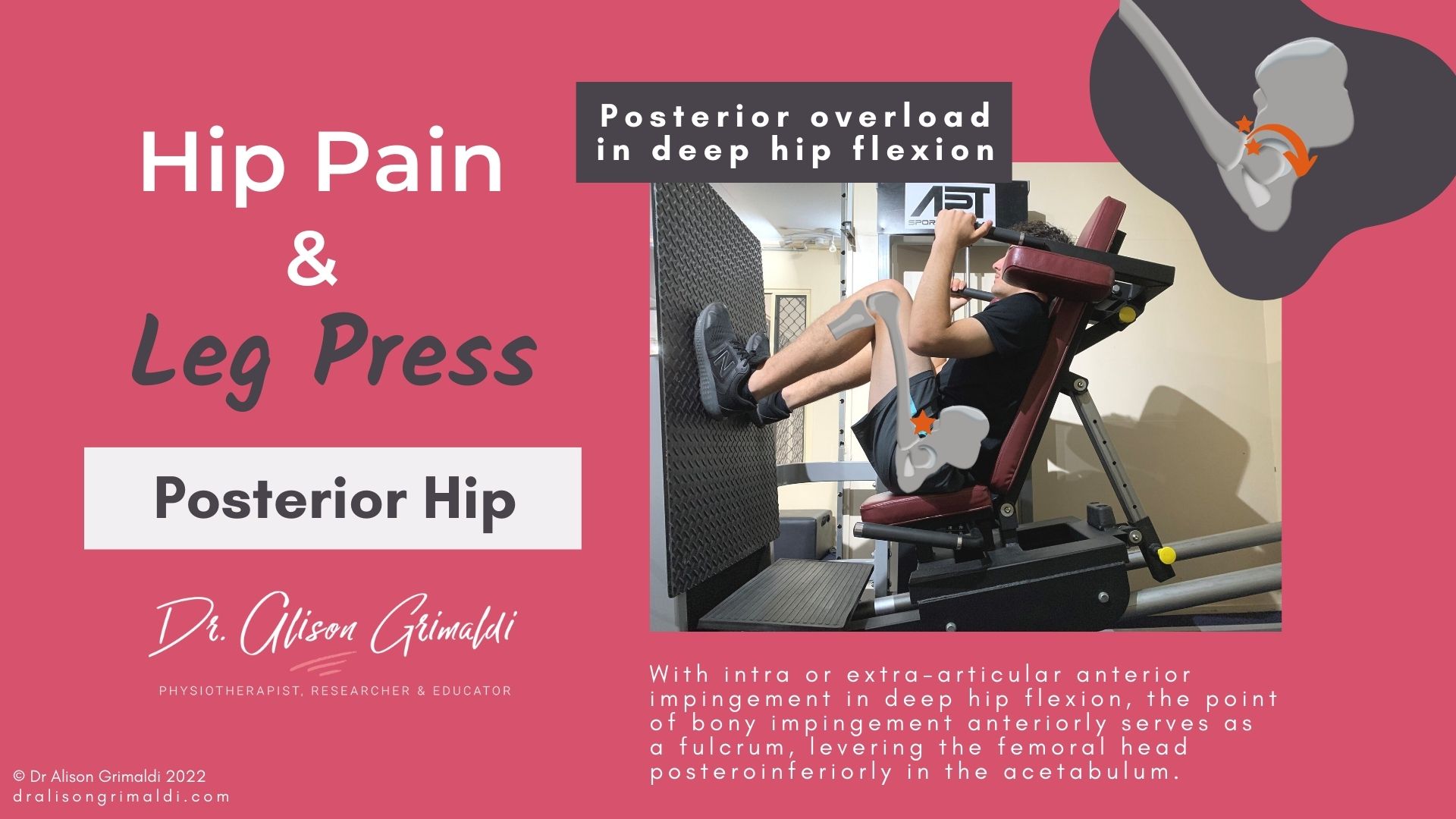 To modify leg press for hip pain, there are 2 main considerations:

The simplest solution here, if available, is to change equipment and swap out the incline leg press for a supine or seated leg press. The style of seated leg press needs to be considered and options for altering hip range evaluated. Ideally the range of hip flexion is limited first to the natural physiological range available in the individual’s joint, and then further reduced initially depending on pain and tolerance. The additional options are to position the hips in some abduction and external rotation, as appropriate for the individual, to allow greater range of motion before reaching the point of bony impingement.

If impingement cannot be avoided with the equipment available, an alternative method for lower limb extensor strengthening should be considered, such as a hack squat, Smith’s machine or free barbell squat. Range of motion can be more easily controlled in these exercises.

To modify range of motion and avoid impingement:

The effect of any end-range loading will be much greater if the action is performed with greater weight, more frequently, at higher volume (reps/sets), and/or at greater speeds. Altering any or all of these factors may assist in altering hip pain provocation from performing leg press.

I hope you have enjoyed this series on modifying gym exercises. See you next month for a new topic.
Sign up to our mailing list below if you don’t want to miss it!