Exercise is essential for optimising health and function of our musculoskeletal system. However, sometimes exercise will provoke pain, increase risk of injury or prevent recovery, if there is an excessive mismatch between the challenge applied to the tissues and the capacity or tolerance of the individual’s system. In the last 2 blogs we’ve explored a number of Pilates exercises and Yoga poses that can sometimes be provocative for hip pain, and how to modify or substitute them to shift the risk-benefit balance in favour of reward. Now we’ll be exploring some gym exercises, and in this blog the focus will be on the Rear Foot Elevated Split Squat, also referred to as the Bulgarian Split Squat. The rear foot elevated split squat is one of those exercises that personal trainers’ love and their students hate, due to its particular challenges. For some unfortunately, the challenge proves too much, resulting in hip, groin or pelvic pain. In this blog we’ll be exploring why, and how we can reduce the risks of exacerbation by modifying the rear foot elevated split squat for hip pain.

This blog contains a free downloadable resource. Read to the bottom to claim your gift.

The Rear Foot Elevated Split Squat or Bulgarian Split Squat, is essentially a single leg squat with the other foot resting on a bench or box behind, either on the toes or the dorsum of a plantarflexed foot. The aim is to squat deep enough to touch or bring the back knee close to the floor. Typically, they are performed with dumbbells by the side in a suitcase carry style but may also be executed with a kettlebell/dumbbell at the chest - goblet style, or with a free barbell or in a Smith machine.

How this exercise is performed is likely to have a substantial impact on load distribution. A recent study of the kinetic and kinematic demands of the rear foot elevated split squat found that the mean contribution of the front side to total vertical force production was around 85%, concluding that the exercise can be considered a unilateral exercise.1 However, this study investigated the Smith machine version of the exercise, which substantially reduces balance requirement and the 3-dimensional challenges of the free-weight version of this exercise. In a free-weight scenario, there are often substantial loads placed on the rear leg for balance and control, particularly when capacity is suboptimal. Even in its unweighted form, this exercise requires high levels of lumbopelvic-hip control. Ideally, the exercise should be modified or substituted for those with inadequate capacity to distribute and control the forces associated with the rear foot elevated split squat, particularly for those with hip pain.

A rear foot elevated split squat is usually performed with the trunk either a little inclined forward or upright, so the quads of the front leg are doing a lot of the work. The deeper the squat or the more forward inclination of the trunk, the greater contribution from the hip extensors. In most cases the degree of hip flexion is not enough to cause the sort of impingement issues experienced in a leg press, although it depends on load applied and how poor the technique is! However, I have seen many people’s lateral hip pain develop or become provoked with the rear foot elevated split squat.

The aggravation or development of pain associated with gluteal tendinopathy in the rear foot elevated split squat is almost always due to inadequate femoropelvic control. Excessive lateral pelvic shift and/or tilt will result in high compressive loads at the greater trochanter of the front hip. Moving repeatedly up and down through hip flexion- extension in an adducted hip position, with the abductors working hard,  imposes high compressive, tensile and frictional forces on the soft tissues of the greater trochanter. Add load and speed and you have a recipe for some very grumpy tendons and bursae!

In those with poor frontal plane femoropelvic control, you will also see compensations such as substantially higher load distribution on the back foot and often abduction of the back hip that is an attempt to increase frontal plane stability. Such compensations lead to other issues.

The potential for exacerbation of hip pain on the back or elevated side is usually dependent on the degree of hip extension and how much work this side is doing. The most common areas of pain aggravation on the elevated side are the anterior hip, and the groin and pubic regions. This exercise can also be highly provocative for sacroiliac joint related pain.

In the rear foot elevated split squat, the shoulder, hip and back knee should remain in a fairly straight line. This means the hip will not move beyond 0° extension. However, placing the front foot too far away from the bench or box will result in greater hip extension. Add poor control and high reliance on pushing through the back leg, and the forces on the anterior hip joint and hip flexors will be very high. The rectus femoris will be particularly overloaded as it works eccentrically to control knee flexion and hip extension on the descent, and then contributes to the ascent through its knee extensor function. Remember the rectus femoris reflected/indirect head has a strong capsular attachment at the hip. Overload of the rectus femoris in this exercise may cause provocation not only of its own muscle belly, musculotendinous junctions or tendons of origin, but also joint related pain due to high loads imposed on the hip capsule and adjacent labrum. Not surprisingly, we also see development or provocation of patellofemoral pain with this exercise. 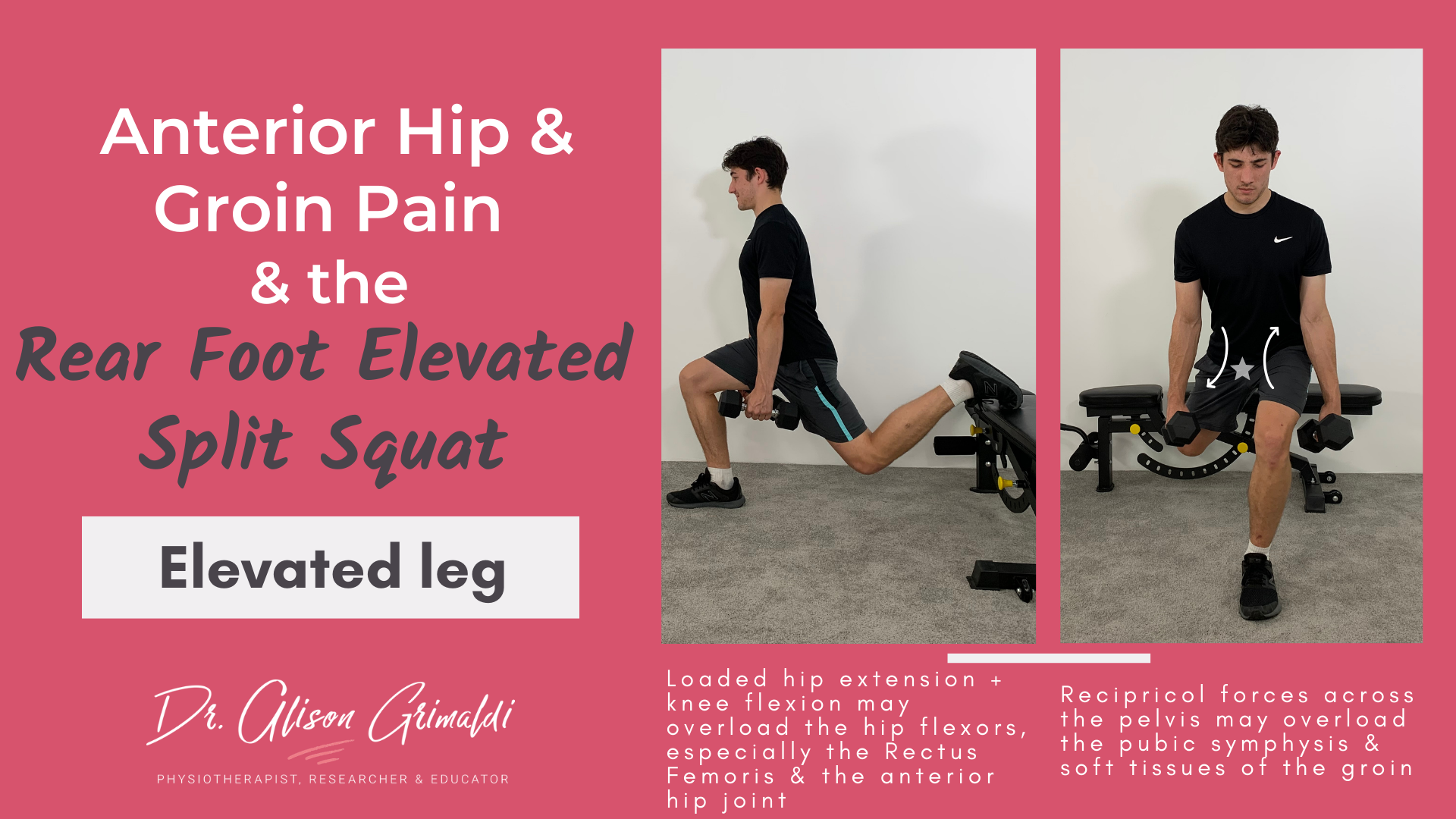 A split squat naturally places challenging loads on the pelvic ring, especially in the sagittal plane where large torsional forces are imposed across the sacroiliac joint (SIJ) and pubic symphysis for the following reasons:

These reciprocal forces are usually amplified in the rear foot elevated version of a split squat, particularly with higher ranges of hip extension and contribution from the rear-side rectus femoris. Provocation of pelvic pain may occur at either SIJ and/or the pubic symphysis – pubic related groin pain. Those with true pelvic instability peri-partum or post trauma will find a rear foot elevated split squat extremely challenging, with the potential for severe exacerbation of pain. Ensure a slowly graduated program of progressive challenges for the pelvis is completed successfully prior to attempting a rear foot elevated split squat.

Adductor related groin pain may also develop or be exacerbated by a rear foot elevated split squat, most commonly from loads generated across the rear hip. If the front side abductors are weak and the pelvis shifts laterally and/or the hip flexors of the rear-side are weak, the rear-side hip may end up relatively abducted. This is often a compensation to try to widen the base for balance and/or to allow the rear adductor longus and brevis to assist in controlling forces in the frontal and sagittal planes. High adductor longus and brevis forces will be transferred across the pubic aponeurosis and into the abdominal wall. In the context of inadequate femoropelvic control and strength around the hips, a rear foot elevated split squat may provoke any of the groin pain entities – adductor related groin pain, pubic related groin pain, inguinal related groin pain and iliopsoas related groin pain.

The rear foot elevated split squat places large loads across the anterior hip of the elevated leg and the groin and pelvis due to the torsional forces.

The first consideration when addressing exacerbation of hip pain associated with a rear foot elevated split squat is around whether the patient has adequate capacity to perform this exercise with optimal technique. If the answer is ‘no’, then it would be better to substitute a less challenging exercise that allows development of the strength and femoropelvic control required for the higher-level task. An offset squat (rear foot on the ground) is a great choice that allows for optimisation of front leg control and strength, prior to adding rear foot elevation. You may also need to incorporate some isolated training of weak muscle groups before attempting this more complex compound action again. When returning to the exercise, keeping depth shallow initially can reduce loads globally. Activation of the hip and knee extensors have all been shown to be maximal at the bottom point of the action,2 so starting with limited depth will reduce requirements initially.

Try the following modifications and technique corrections for the rear foot elevated split squat, to avoid exacerbation of hip and pelvic pain:

To reduce hip extension, reciprocal loads across the pelvis and overall challenge

Avoid lateral shift of the pelvis, resulting in excess adduction of the front hip and usually abduction of the back hip to widen the base to stabilise

There is still more to come in this series on modifying gym exercises, but we’ll continue in 2022, as I have other things in store for you for December. Keep an eye out for the 12 Hip Days of Christmas again this year. Sign up to our mailing list if you don’t want to miss it!