Getting to the bottom of buttock pain often presents a diagnostic dilemma, which is perhaps why the buttock appears to have been assigned more syndromes than any other region of the body. So, what exactly is a syndrome? While a disease is usually defined as a specific process that occurs within the body, the term ‘syndrome’ is used to describe a collection of symptoms. For musculoskeletal conditions, ‘syndrome’ may be appended to the body region or area of anatomy, simply denoting a collection of symptoms experienced in the area. Syndromes of the buttock include piriformis syndrome, gemelli-obturator internus syndrome, retro-trochanteric pain syndrome, deep gluteal syndrome, ischial tunnel syndrome, hamstring syndrome, and greater trochanteric pain syndrome. Let's take a walk through some of these syndromes and then discuss the relative merits or otherwise of such diagnoses.

Syndromes of the buttock

Piriformis syndrome is arguably the best known and most contentious syndrome of the buttock. In most cases, this diagnosis is used when some form of sciatic nerve entrapment is suspected at the level of the piriformis. The nerve (divided or undivided) may variably run under, through or occasionally over the piriformis as it exits the pelvis through the greater sciatic notch. These variations were first described by Beaton and Anson in 1937. Entrapment of the sciatic nerve is suggested to occur due to one or a combination of factors such as anatomical anomalies, piriformis hypertrophy, dynamic entrapment associated with certain activities, trauma/overuse and spasm (Hernando et al 2015). This may cause local nociceptive pain, sciatica (sciatic neuralgia) and dysaesthesia. While there appears adequate surgical evidence that this situation does arise, piriformis syndrome is considered a myth by some. This is probably due to the gross overdiagnosis of this condition. On a quick internet search, the first definition of piriformis syndrome that popped up was ‘a condition in which the piriformis muscle, located in the buttock region, spasms and causes buttock pain’. Some include myalgia and well as neuralgia within the syndrome and use it to denote almost any pain in the buttock region. It’s no wonder that the diagnosis fell out of favour.

In the last 5 years, surgical studies have reported that entrapment of the sciatic nerve may occur at a number of locations through the buttock, with only one of those being in the greater sciatic foramen/piriformis region (Martin et al 2015, Hernando et al 2015).  Gemelli - obturator internus syndrome refers to symptoms associated with sciatic nerve entrapment at the level of the conjoined gemelli- obturator internus musculotendinous complex at the posterior aspect of the hip joint. As the nerve runs under the piriformis and over the adjacent gemelli - obturator internus complex, a dynamic scissor-type effect has been proposed as one aetiological mechanism (Hernando et al 2015).

Retro-trochanteric pain syndrome was suggested as an alternate diagnosis to piriformis syndrome when surgical investigations identified impingement of the sciatic nerve at the level of the obturator internus tendon (Meknas et al 2009). The terminology also seemed to include tendinopathy of gluteal and obturator tendons, apparently an umbrella term for any pain in the retrochanteric region.  There was never a great uptake of this diagnostic term, perhaps due to the lack of clarity around the definition.

Deep gluteal syndrome is a relatively more recent term used to describe ‘the presence of pain in the buttock caused from non-discogenic and extrapelvic entrapment of the sciatic nerve’ (Martin et al 2015). Effectively, this is a peripheral nerve entrapment of the sciatic nerve somewhere within the deep gluteal space. The deep gluteal space, also referred to as the subgluteal space, is the region beneath the gluteus maximus which contains the piriformis, the superior gemellus, obturator internus, inferior gemellus, quadratus femoris and the neurovascular structures that transit from the greater sciatic foramen to the posterior thigh. Deep gluteal syndrome then encompasses piriformis syndrome, gemelli - obturator internus syndrome and any other cause of sciatic nerve entrapment in this space such as tumours, vascular abnormalities and fibrous bands (Martin & Gómez Hoyos 2019).

Ischial tunnel syndrome, sometimes also referred to as hamstring syndrome, refers to sciatic nerve entrapment or irritation in the ischial tunnel, between the ischium and the femur (Martin et al 2016). The sciatic nerve runs over the quadratus femoris and adjacent the hamstring tendon origin at the ischium. The nerve may be adversely affected by tendinopathic proximal hamstring tendons or become impinged together with the quadratus femoris in ischiofemoral impingement. 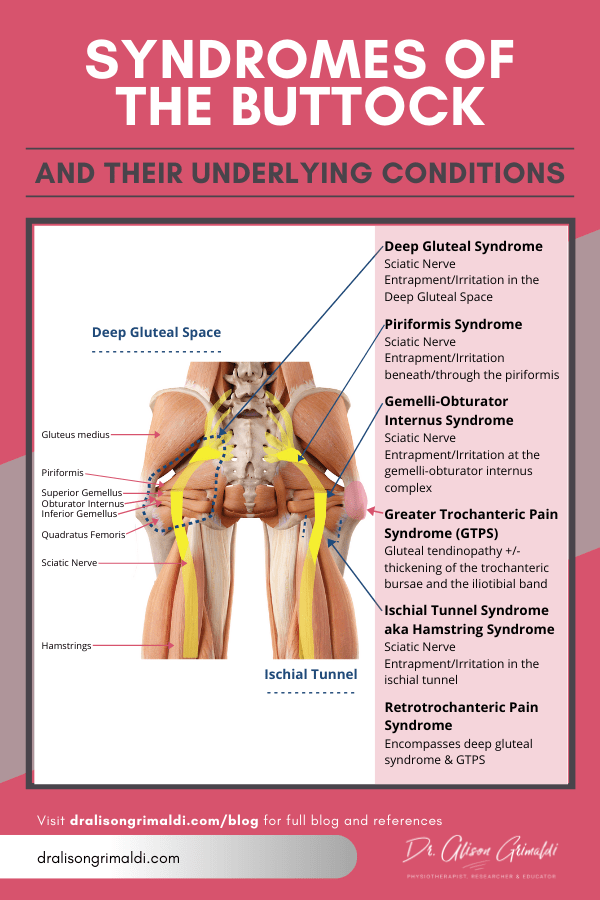 How do these diagnoses inform our patients and our management?

In my opinion, not much! If a syndrome refers to a collection of symptoms, what exactly are we telling our patients, except they have a group of symptoms that they just relayed to us. They already know what they are experiencing, they want to know why and how to improve their situation. Being diagnosed with a ‘syndrome’ does little to clarify the condition for the patient and often induces fear and/or a low expectation of a successful outcome.

The diagnosis of a syndrome, by definition, requires only a patient interview. The addition of a thorough physical examination and where required, imaging, should substantially increase the ability of the clinician to determine the most likely source/s of nociception (if local nociception persists), contributing mechanobiological mechanisms and subsequently a clinically reasoned path of intervention.

What should we be telling our patients then?

Piriformis syndrome, gemelli-obturator internus syndrome, deep gluteal syndrome, ischial tunnel syndrome and hamstring syndrome are all names for symptoms associated with peripheral entrapment neuropathy of the sciatic nerve with varying locations of impingement or irritation throughout the buttock. The word ‘entrapment’ can also evoke fear, so I find it simplest to tell the patient that the sciatic nerve is being irritated on its pathway from the spine, through the buttock to the thigh. I find that an anatomical model is a great teaching tool as long as the description is informative but non-threatening. Treatment will then involve improving health and function of the local interfaces of the peripheral nerve through the buttock, as well as calming the irritated nervous system more globally. If we wanted to use an clinical entities approach (Holmich 2007), we might globally refer to nerve irritations in the buttock as 'nerve-related buttock pain' and then specify which nerve is most likely to be involved.

Greater trochanteric pain syndrome can be simply explained as a condition primarily of the gluteal tendons – gluteal tendinopathy. In some people there are also accompanying changes in the other nearby structures – bursae and the iliotibial band. All of these structures are affected by the same mechanisms, so the treatment approach will be to minimise irritating loads and optimise health of all the structures in this region. If the use of a pathological term is not acceptable to some clinicians, then perhaps a clinical entities approach may again be more palatable and still preferable to the use of the term 'syndrome'. GTPS could be referred to as Abductor Related Lateral Hip Pain, similar to the groin pain entities model (Weir et al 2015), although like adductor related groin pain this would include any pathology of the abductor mechanism including muscle and musculotendinous tears, which are a little different to gluteal tendinopathy. To be more specific then, one might use the term Abductor Related Greater Trochanteric Pain. This denotes the tissues in which pathology and impairments have been established and clarifies the site of symptoms.

Further discussion is required in both research and clinical health professional communities regarding the terminologies we use to diagnose buttock pain, and how helpful these are both in directing intervention and providing a non-threatening and yet meaningful diagnosis to the patient. Of course to reach any sort of useful diagnosis and intervention plan, clinicians should ensure they have adequate knowledge of local anatomy, common pathologies, the mechanobiological mechanisms, physical assessments and evidence-informed interventions. 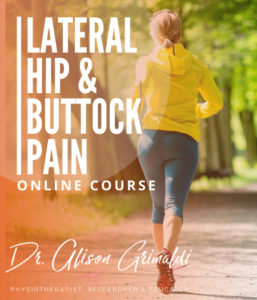