While ‘clicky hips’ are often associated with acetabular dysplasia in infants, there are many things that go ‘click’ in the adult hip. Most of these are innocuous, but sometimes they are painful or of concern to the owner of the noisy hip. Sources of snapping or clicking in the hip may include:

Being aware of the different causes of clicking in and around the hip will allow you to reassure your patient and where necessary, develop an informed intervention for managing painful clicking. In medical terminology, snapping hip is often referred to as coxa saltans. Coxa is latin for “hip,” and saltans, means “jump.” Snapping or clicking may emanate from either outside the joint (extraarticular) or inside the hip joint (intraarticular). Let’s explore some of the possible sources.

Iliopsoas snapping is usually attributed to tightness or overactivity of the iliopsoas, with treatment involving stretching or manual or surgical ‘release’. There are many unsubstantiated assumptions here and optimal management of painful iliopsoas snapping remains contentious but beyond the scope of this current blog.

The other most common source of extraarticular snapping is that of the iliotibial band or gluteus maximus snapping around the greater trochanter7. This is referred to as external snapping hip, external coxa saltans, lateral snapping hip or more specifically, iliotibial band (ITB) snapping. Patients may report the snapping occurs with loaded weightbearing tasks such as squatting, bending forward, walking or stairclimbing. Some will report that their hip dislocates, subluxes or ‘pops out’. This is important to address, as this belief can perpetuate fear avoidant behaviours. When asked to reproduce the hip ‘dislocation’, the patient will usually be able to demonstrate in standing by simply shifting their pelvis posterolaterally. The ITB shifts anteriorly over the greater trochanter, causing a loud snap or clunk which can be understandably concerning.

Audible snapping of the ITB during gait is generally easily palpable over the greater trochanter. If you cannot palpate any physical translation of the ITB at the greater trochanter during a mid to late stance phase click, be suspicious of ischiofemoral impingement. Ischiofemoral impingement refers to impingement of soft tissues between the lateral ischium and the lesser trochanter8. Quadratus femoris sits in the ischiofemoral space and may become painful and oedematous due to repetitive impingement between the bones. The tendons inserting into the ischium (hamstrings) and lesser trochanter (iliopsoas) may also become sources of nociception due to the repetitive friction.

Ischiofemoral impingement is not always accompanied by an audible click, but in some people the noise is easily heard as the bones move past each other in mid-late stance phase. This will not be palpable, but you can test your theory with the long stride walking test9, where symptoms worsen with large strides and reduce with small strides or walking with a wider base. Ischiofemoral impingement may be structural, functional or both, with non-surgical management aiming to reduce impingement through load management education, movement training and exercise therapy.

A relatively rarer source of external coxa saltans is a subluxation of the hamstring tendon, also referred to as ‘snapping bottom.’ This condition may be associated with proximal hamstring tendinopathy or partial tear of the lateral portion of the hamstring origin10. Snapping is most likely to occur when the hamstrings are on tension, such as in forward bending, or when the tendon is pulled laterally in FABER-type hip positions. Non-surgical treatment includes load management for the proximal hamstring tendinopathy, with specific attention to load sharing in forward leaning and controlling sustained or repetitive exposure to subluxation positions.

Optimising health of the hamstring tendons, and hip extensors more generally, through a targeted exercise program can be useful. If non-surgical intervention is unsuccessful in reducing pain and restoring function, surgical intervention includes partial tenotomy or tenodesis (tendon transfer) of the damaged portion of the tendon.

Intra-articular snapping or clunking may be related to chondral or labral defects or flaps, or loose fragments moving around the joint11. In younger patients, this is most commonly associated with femoroacetabular impingement. Rarely, tumours or benign lumps in the synovial lining associated with conditions such as pigmented villonodular synovitis or synovial osteochondromatosis (lumps of cartilage and bone in the synovium) may also cause snapping or clicking sounds11. However, most painfree clicks and pops from the hip joint are unlikely to be related to any pathology.

Synovial folds or plicae of the hip joint

There are a number of regions where plicae have been identified in the hip joint, but the most consistent is a fold in the synovium that sits inferior to the head and neck of the femur. It’s called the medial neck plicae or pectinofoveal fold. Blankenbaker and colleagues reported that the pectinofoveal fold was identifiable in 95% of magnetic resonance arthrograms and 99% of hips on arthroscopy13. While the fold is normal, it’s possible that repetitive clicking may contribute to joint synovitis. Clicking of the femoral head over a synovial fold is more likely to occur while moving through larger ranges of motion and perhaps in those with reduced passive stability and greater translation of the femoral head.

The deep clunk that is produced when patients demonstrate their self-manipulation techniques often involves a forced FABER position, or moving into a sidelunge/adductor stretch position and then thrusting the pelvis anteriorly or rotating the pelvis into hip external rotation. With the inferior capsule and adjacent synovium on stretch, forcing the femoral head anteriorly may produce a snapping or clunking as the femoral head is forced over the synovial fold. While an occasional spontaneous clunk is of no concern, persistent joint related pain in the context of repetitive, habitual self-manipulation could possibly contribute to synovitis and may require education and strategies for behaviour change.

As with any of our synovial joints, popping sounds from the joint may be generated by cavitation.   Cavitation refers to the formation of a gas cavity in the joint, when dissolved gas is temporarily drawn out of the synovial fluid. This is also called tribonucleation, where gas bubbles are created during separation of solid surfaces immersed in a liquid containing dissolved gases13. Within the normal hip joint, joint separation is resisted not only by the adhesive forces of the intra-articular synovial fluid, but by the strong vacuum created by the sealing function of the acetabular labrum. Distraction forces are also resisted by capsuloligamentous structures. Popping noises associated with cavitation occur when forces working to separate the joint surfaces overcome the forces drawing them together, dragging gasses from the fluid to create a temporary gas bubble or cavitation. This gas will be reabsorbed into the synovial fluid when the force profile is reversed.

Those with hypermobile joints (hypermobile Ehlers Danlos Syndrome or Hypermobility Spectrum Disorder) report noisy joints more frequently than others. With the lower amount of force required to separate the joint surfaces, cavitation is likely to occur more frequently. By the same reasoning, those with a disturbed labral seal secondary to labral tear and/or debridement, or traumatic or iatrogenic capsuloligamentous damage, may experience more regular popping of their hip joints.

In conclusion then, there are a number of structures and mechanisms that may be responsible for clicking, snapping or popping around the hip. Most of these are painfree and completely innocuous. They may be associated with anatomical variations, particular movement or muscle recruitment patterns, capsuloligamentous laxity or pathology (relatively rare). If the snapping or clicking is painful, muscle and movement pattern training can often assist. Where there is an underlying structural cause, load management advice around strategies to avoid or minimising painful clicking is key. Education and strategies for avoidance of habitual self-manipulation may also be required.

Next time a patient asks you about their clicky hip, hopefully you will have all these possibilities in mind. After asking about the action in which the noise generally occurs and undertaking a physical examination, you should be able to provide a well-informed answer and either reassurance or a strategy to address the underlying source. 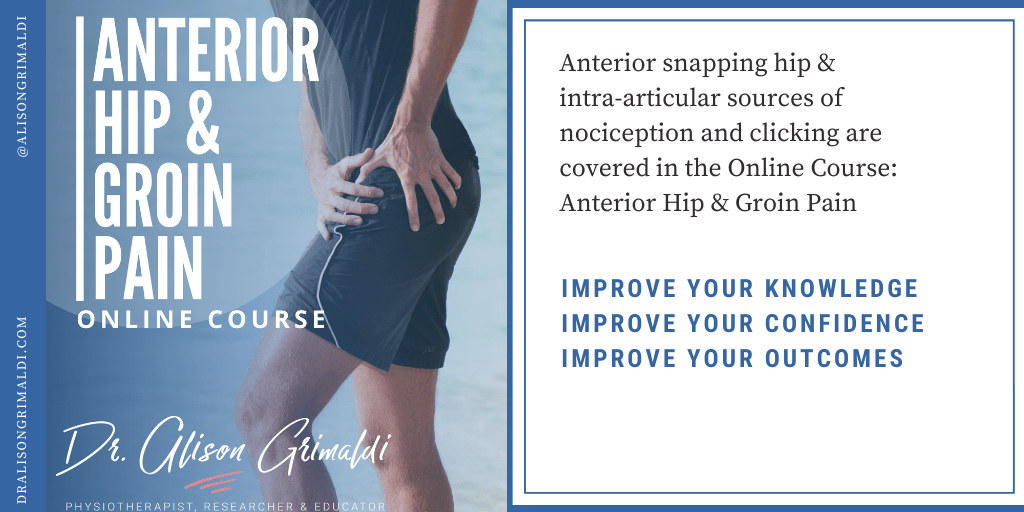 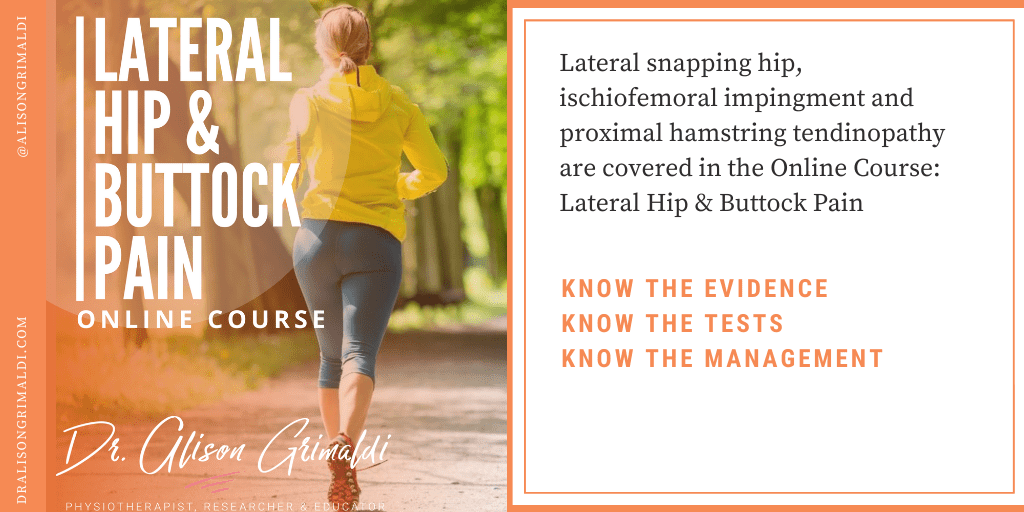