Femoral malversion (excessive femoral anteversion or femoral retroversion) is increasingly recognised as an important factor that may influence mechanical loads around the hip and development of both intra-articular and extra-articular pathologies. To develop effective prevention strategies, we must first understand what it is, what impact it has, and how it develops.

These are the topics we’ll be covering in this blog:

· The impact of femoral malversion

· Natural development and change in femoral version through growth

The typical human femur is anteverted somewhere between 10 and 20 degrees. This means that when the femoral condyles are horizontal, the head and neck twists forward (anteriorly – ante) 10-20 degrees.

Malversion refers to a twist in the femur that is greater than or less than this typical range. There are no agreed cutoffs, but these are the most recently suggested normative values.1,2 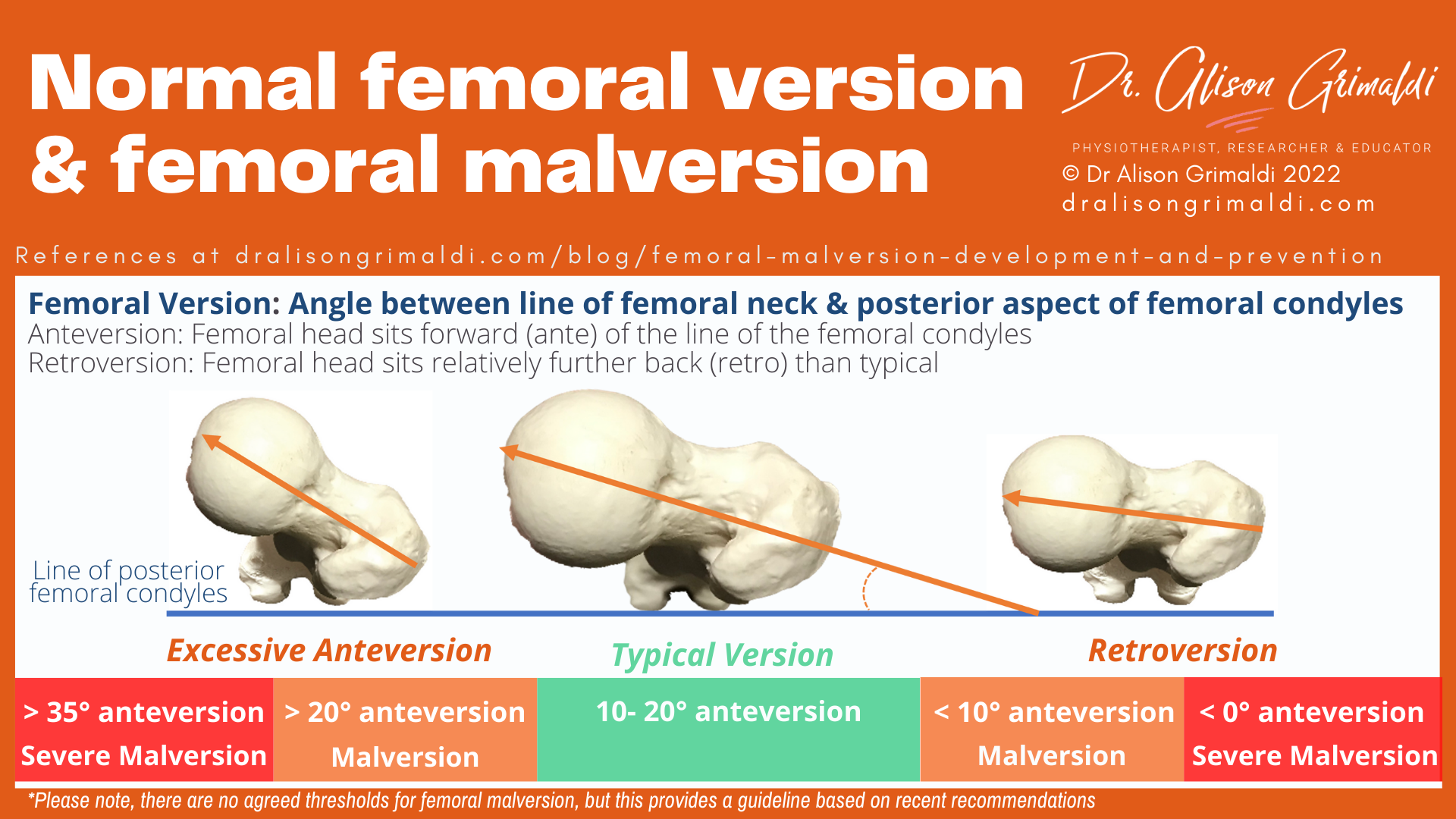 Find out more about Hip Academy

The impact of femoral malversion

The information below covers relationships between femoral malversion and various potential functional and pathological effects. However, it’s important to note that direct causation is difficult to establish, so consider these as associations that are subject to change depending on other concurrent factors.

Falls, fatigue and balance in children with excessive femoral anteversion

Children with increased femoral anteversion were found to fall four times more during running (60%), and three times more during fast walking (21.42%) than their healthy peers (14.28%, 7.14% respectively). These children also reported functional difficulties and fatigue with walking long distances and standing on one spot.3

A recent study of healthy children (age 10-15, 44% female) with increased femoral anteversion (mean 24°) found these children had significantly poorer balance in multiple parameters than peers with a mean 15° of anteversion.4

For some children, these impacts may have further implications in terms of increased risk of falls-related injury, reduced self-confidence and reduced engagement in physical activity. 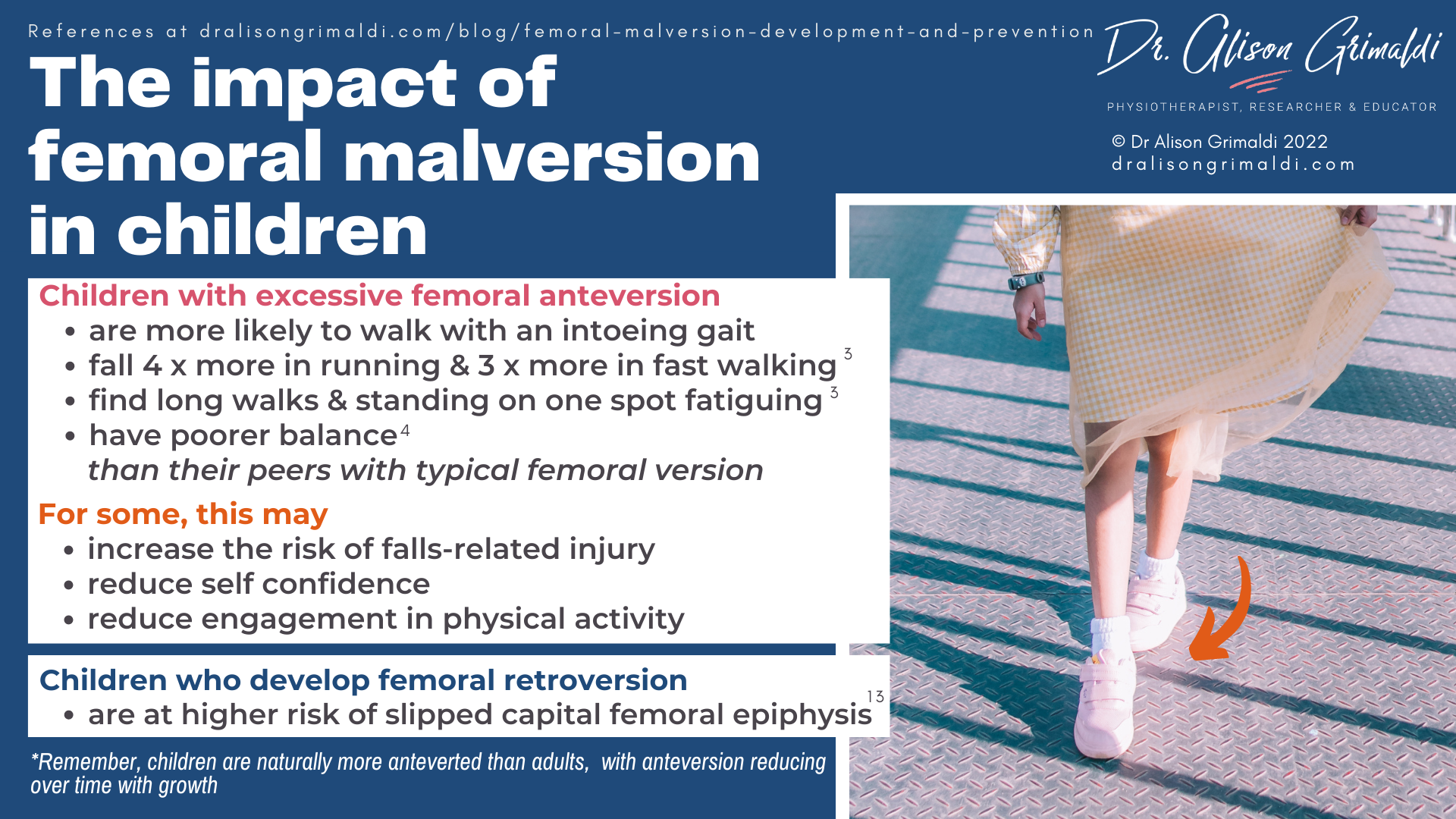 A common compensatory strategy for intoeing is external rotation of the tibia.7 This means that children with excessive femoral anteversion will not always be easily identifiable by intoeing gait.

There is conflicting evidence when it comes to the relationship between femoral version and joint forces. A recent study of healthy adults found that higher femoral anteversion led to significantly higher anteromedial hip contact forces in gait, with the potential for altering risk of articular damage.5

Another study of adolescents reported that increased femoral anteversion does not lead to increased joint forces during gait.8 Both research groups noted that the impact was likely to be mediated by kinematic strategies and different muscle forces, a potential reason for variable results in relatively small cohorts (n ≈ 40).

So, femoral anteversion can potentially change joint forces, but it also depends on the way people move and how they use their muscles. 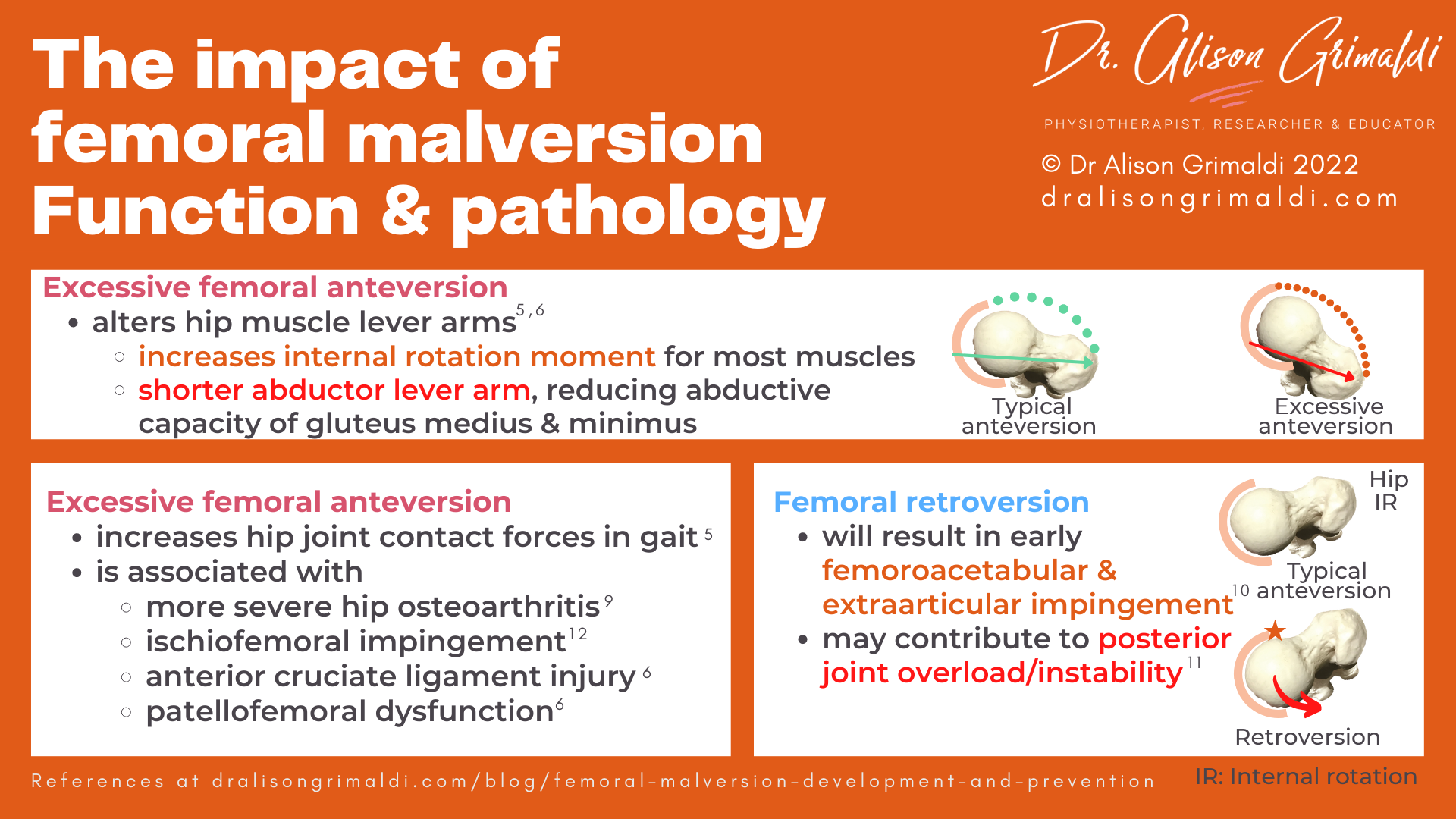 A recent systematic review and meta-analysis reported that excessive femoral anteversion may be a risk factor for more severe hip OA, independent of concurrent acetabular dysplasia. They also found a positive correlation between the amount of increased anteversion and severity of hip OA.9

At the knee, greater femoral anteversion angle is associated with increased risk of anterior cruciate ligament injury and patellofemoral dysfunction.6

Natural development and change in femoral version through growth

The course of the femur’s rotational development begins within the uterus. In early gestation, the human foetus has plenty of room to move and 0° of femoral version. From the second trimester, the confinement of the uterine walls begins imposing torsional loads on the limbs. The hips are forced into maximal flexion. Levering of the femoral shaft against the prominent anterior superior iliac spine has been hypothesized to create a torsional moment, resulting in femoral anteversion.12

Babies are born with 30-40° of femoral anteversion, gradually unwinding to around 15° in adulthood.12 During childhood and adolescence, a gradual decrease in anteversion of around 1.5° a year continues until growth is complete.6

Genetics is thought to play some role in the development of femoral version type, via a polygenetic influence on proximal femoral shape.13 There have been variable findings with regard to ethnicity, perhaps due to variation in measurement methods.

In a more recent CT study, no statistically significant differences were found between groups. However, almost 6% of African American males and females exhibited femoral retroversion, compared with only 0-2% of Caucasian and Hispanic participants.14

While again there has been variation in findings, most studies report 2-8° higher angles of femoral anteversion in females compared with males. One suggestion is that this may be due to earlier closure of female growth plates, giving the femur less time to derotate.6

There may be other inter-related factors around muscle function and participation in weightbearing activities as we will explore below. 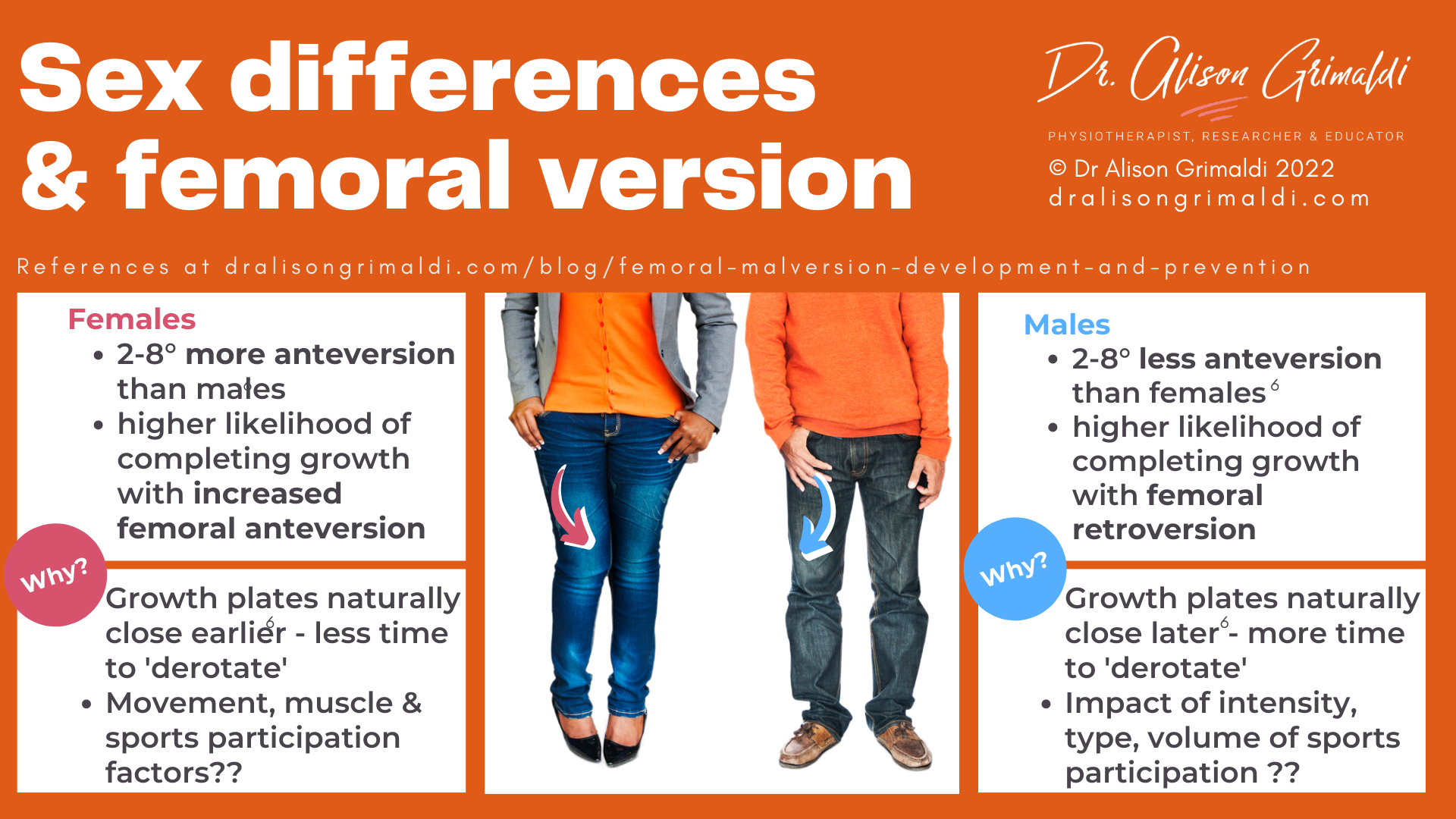 The influence of mechanical loading on development of femoral version

Mechanical loading appears to be a major player in changing femoral version both in utero and during childhood and adolescence.

Breech babies (born bottom first) are born with around 10° greater femoral anteversion than babies who have been in the head down position.15 For babies sitting bottom down in the mother’s pelvis, greater restriction of hip motion and pressure on the posterior femoral head and acetabulum is thought to create the higher levels of femoral anteversion.

Children with cerebral palsy (CP) are known to maintain much higher levels of femoral anteversion through growth – their femurs don’t tend to derotate. This suggests mechanical forces are highly significant in the normal femoral ‘derotation’ process that occurs through childhood.6

So, what is the main factor maintaining femoral anteversion in children with CP? Is it the significant reduction in weightbearing activity, or the altered muscle forces?

It’s highly likely that these factors are linked, and both play a role. A recent lab-based study on immature rats demonstrated that reduced mechanical loading, achieved through hindlimb suspension during the growth phase, resulted in significantly higher angles of femoral anteversion. This suggests that weightbearing loads are not only important for development of bone density but also for bone shape development.

While CP is an extreme example, lack of weightbearing activity also has the potential to impact on femoral growth in children without neurological deficits. It does raise the question:

Do reducing activity levels in our children put them at higher risk of maintaining excessive femoral anteversion and the impacts of this morphology?

At the other end of the gravity spectrum, obesity in adolescence is associated with reduced femoral version. Galbraith and colleagues reported a mean version angle of only 0.4° ± 13° in obese adolescents – representing relative retroversion.16 Carrying extra load against gravity appears to accelerate femoral ‘derotation’ during growth.

Femoral retroversion places greater shear force across the growth plate, increasing risks of epiphyseal slippage. This may be one of the key reasons why slipped capital femoral epiphysis is more common in obese adolescents.13 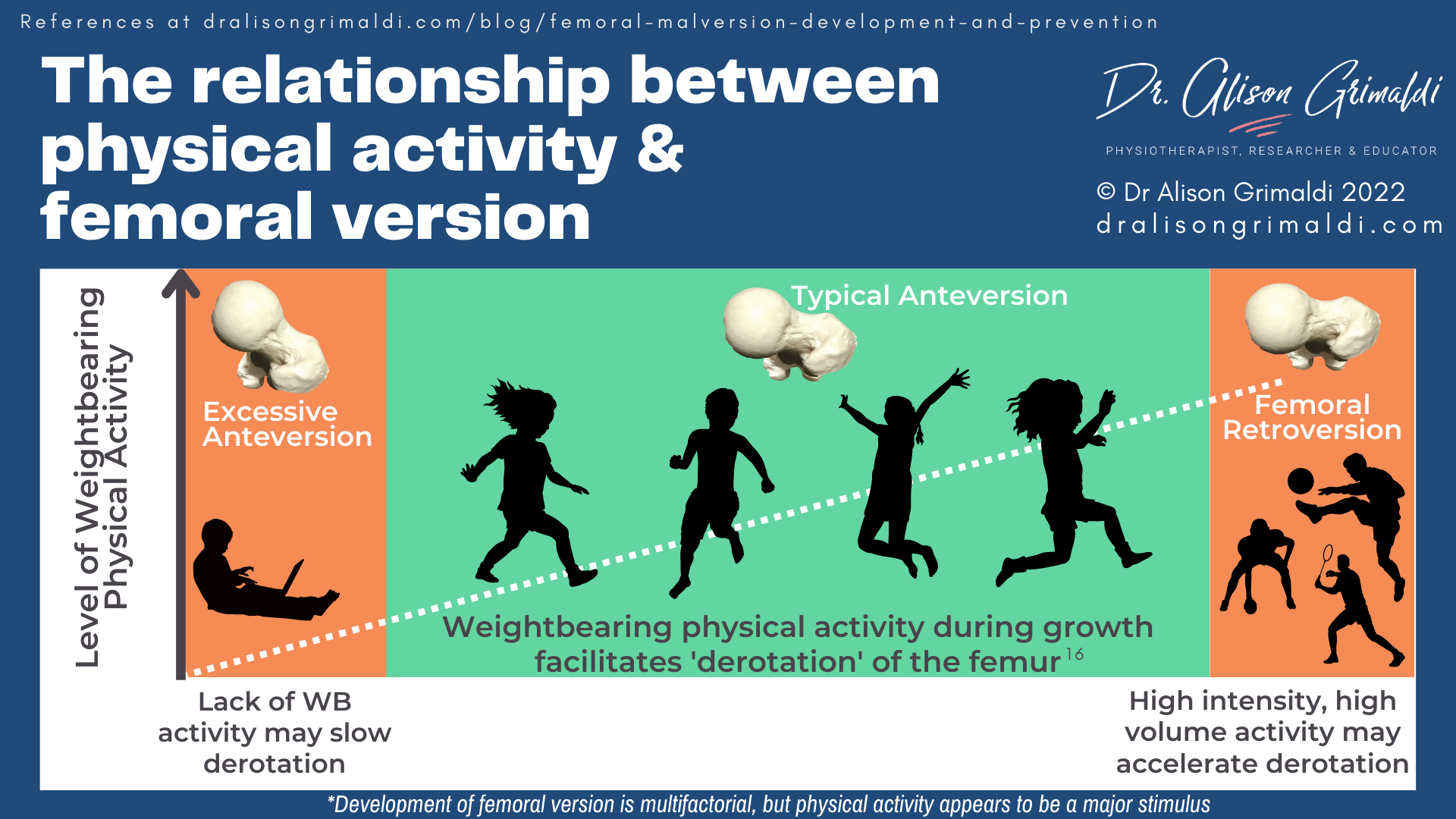 Type of sport and femoral version

A more recent study by Yadav and colleagues used finite element modelling to predict growth rate and growth direction of the proximal femur in response to various hip contact force scenarios.17 They found that femoral anteversion reduced more when the lateral hip contact force was similar or higher than the posterior hip contact force.

Physical activities that have more laterally than posteriorly oriented hip contact forces include many weightbearing activities such as walking, climbing and descending stairs, jumping and running.

Children with low physical activity levels or who participate in high volume water-based sports with low exposure to weightbearing loads, may be at greater risk of completing their growth with excess femoral anteversion.

At the other end of the spectrum, Yadav and colleagues suggest that performing these weightbearing activities at high volume and at high intensity, could be expected to accelerate femoral morphological changes.17 Young athletes playing high volume weightbearing sports may then complete their growth with relative femoral retroversion.

In my last blog, I talked about the relationship between high volume weightbearing sports and the increased risk of developing cam morphology. High volume ‘hip-heavy’ sports could possibly increase the chances of both cam morphology and femoral retroversion. The combination of both these morphologies will result in femoracetabular impingement earlier in hip flexion10 and internal rotation range.

Certainly not everyone with cam morphology has femoral retroversion, but the combination has been shown to increase the chances of early impingement.10 Lerch and coinvestigators also found significantly lower mean femoral version in those with symptomatic cam-type FAI compared with control participants.2

The effect of muscle forces on femoral version

Yadav and colleagues used 3D kinematic data and MRIs to develop models that aimed to illustrate how different muscle groups’ activation during gait affects proximal femoral development in able-bodied children.18 They found that the hip abductors contributed the most, and hip adductors the least, to growth rate at the proximal femur.

Antagonist strength ratio’s may be important in the developing femur. For example, higher hip adductor strength than abductor strength may favour femoral anteversion. The adductor:abductor ratio is something that is often used as an indicator of optimal muscle balance and possible resilience against groin injury. The optimal ratio for soccer players has been suggested to be in the range of 1.25 – 1.6, adductors stronger than abductors.19

While stronger adductors might reduce groin injury risk, in skeletally immature athletes this muscle imbalance in favour of the adductors could alter proximal femoral development.

This paper collected hip abductor muscle strength measures but not adductor strength, so the ratio in these players is unknown. They did report poor frontal plane femoro-pelvic control in a step-down task, which could suggest inadequate abductor function. In soccer players with presumably higher adductor strength, an imbalance in the adductor:abductor ratio may also have contributed to the lack of femoral ‘derotation’ and higher femoral anteversion. 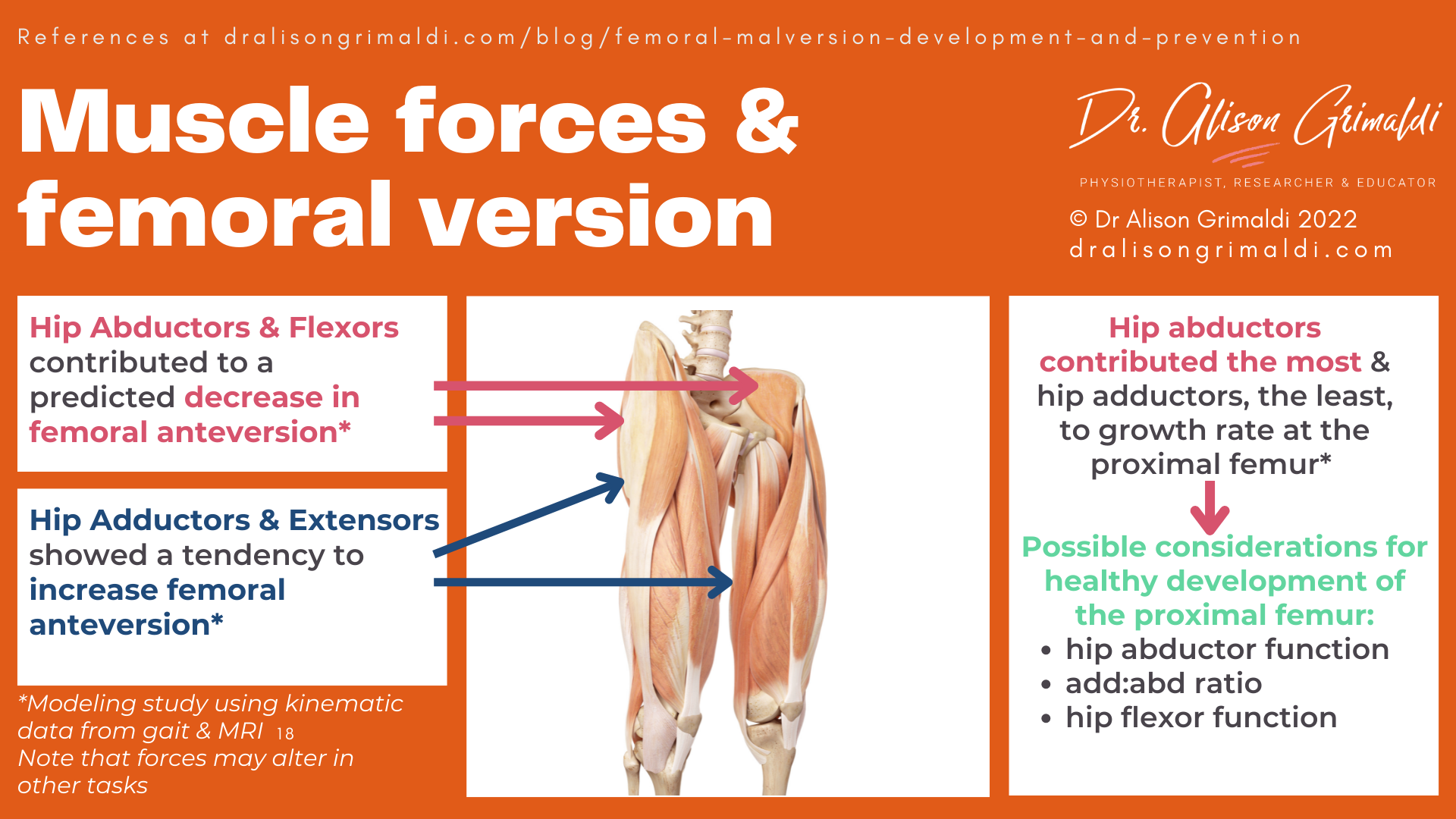 Does ‘w sitting’ cause excessive femoral anteversion? The influence of sustained postures on femoral version

The answer to this question has not been resolved in scientific studies. Children with excessive femoral anteversion often tend to favour this position,21 but is the posture a cause or an effect of the excessive anteversion?

Sustained internal rotation has been shown to increase femoral rotation in immature rabbits - the longer the internal rotation position was sustained with splinting, the greater the femoral anteversion.22 Habitual w-sitting for long durations may for some children, over time, impose enough torsional load to slow the derotation process.

However, a healthy child who is moving in and out of this position regularly and engaging in plenty of weightbearing activity, is likely to simply grow out of this habit as their femurs naturally derotate. 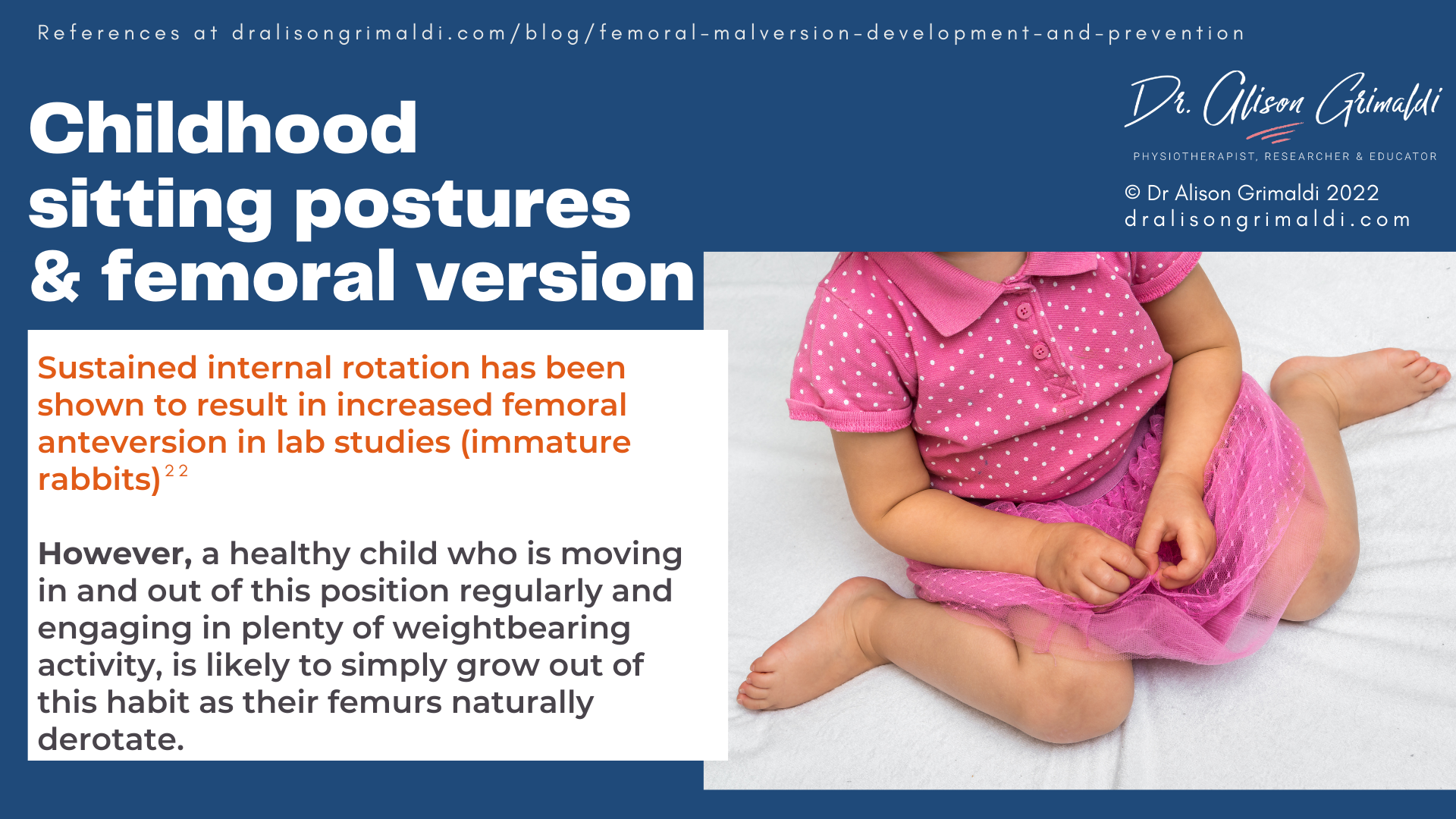 In the absence of scientific evidence then, we can use the information available to develop some biologically plausible strategies.

I have paired the key pieces of biological information with some suggested strategies for you in a free pdf download available below. 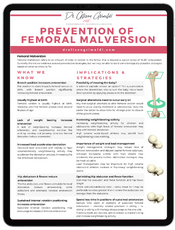 Download this FREE Resource on the Prevention of Femoral Malversion

Simply head to the link below to sign up to our mailing list and receive your free download, sent directly to your inbox. You can unsubscribe any time and your personal details will never be shared.

You can find heaps more information about assessing femoral version and managing femoral malversion in the courses and video technique video available within Hip Academy.

If you would like to learn how to effectively assess and manage pain associated with femoral malversion, then explore the learning options available at dralisongrimaldi.com
Anterior Hip & Groin Pain Online Course
This online course includes:

Check Out Some More Relevant Blogs