What do your patients most look forward to once they have finally made the decision to take the leap into a surgical solution for end stage hip osteoarthritis? PAIN RELIEF! Of course, there are many functional and quality of life ambitions, but these are usually inextricably linked with relieving the pain of advanced arthritis. Failure to achieve adequate pain relief, particularly when a completely new pain scenario develops post operatively, can be devastating. The knock-on effect is usually an inability to restore function and quality-of-life, with expectations and goals much higher in the rising numbers of younger people who are now undergoing total hip arthroplasty each year. There is a wide range of reasons why pain may persist but, in this blog, we are going to discuss one of the most common reasons for persistent groin pain following total hip replacement - iliopsoas impingement.

While overall, total hip replacement is a highly successful procedure in appropriate candidates, the incidence of persistent pain following surgery has been reported to be as high as 40%1. Most causes of postoperative pain following joint arthroplasty can be encompassed within Brown et al’s “four I’s”:

In this blog, we will focus on soft tissue impingement, with one of the most likely reasons for anterior hip or groin pain after total hip replacement being impingement of the iliopsoas tendon against the underlying prosthesis. Iliopsoas impingement may occur in up to 4.3% of patients who undergo hip replacement surgery3.

Pain is experienced at the front of the hip or groin region during contraction or stretch of the hip flexors. Pain is typically felt:

Some patients will experience pain and spasm on rising to stand from sitting, finding it difficult to initially extend the hip to achieve an upright standing position.

The primary reasons for iliopsoas impingement against the prosthesis are related to the selection and placement of the acetabular cup4. Imaging features particular to patients with iliopsoas impingement have been investigated by a number of research groups. Cup prominence appears to be the critical factor. One study found that patients with iliopsoas related groin pain after total hip arthroplasty had an acetabular cup overhang, beyond the native socket, of more than 12 millimetres, while asymptomatic patients had an overhang of less than 8 millimetres3. They suggested that a measurement of more than 12mm would increase the risk of iliopsoas impingement. Pain arises from irritation of the iliopsoas running over the anterior part of the acetabular cup uncovered by the native acetabular bone structure. Excessive cup prominence or overhang is related to cup size and orientation.

Researchers identified that compared with asymptomatic patients, those with iliopsoas impingement following total hip arthroplasty had a significantly greater difference in diameter of the native femoral head relative to that of the implanted cup5. They found that those with a head-to-acetabular component size difference of > 6 mm were 26 times more likely to experience groin pain associated with anterior iliopsoas impingement against the oversized cup.

Cup inclination in the coronal plane have been reported to range between 35 and 50 degrees normally6, although Odri and colleagues reported 40-50 degrees as an optimal range5. Their research demonstrated that the acetabular cups of those with iliopsoas impingement following total hip arthroplasty had significantly lower inclination compared to a painfree control group. The median angle of inclination was at the lowest end of the normal range - 40° (range 20-56°) in those with iliopsoas impingement, compared with 46° (range 20 - 75°) in those without pain5. Excessive cup downward inclination will result in greater overhang of the cup relative to the native acetabulum and pressure against the overlying iliopsoas.

Acetabular version measured on an axial Computerised Tomography (CT) scan is normally more than 0° and less 25° of anteversion3 i.e. the cup is usually facing relatively more forward, just like the average native acetabulum. A prosthetic cup that is retroverted (facing backwards) will usually result in acetabular cup overhang anteriorly, predisposing to iliopsoas impingement against the proud cup. The natural amount of version of the native socket is relevant, as Park et al7 found that a greater difference in anteversion between the native acetabulum and acetabular component, resulted in a greater volume of the iliopsoas exposed to the prosthetic cup.

The psoas valley or notch is the indentation or depression in the superior acetabular rim, between the iliopectineal eminence and the Anterior Inferior Iliac Spine8. The iliopsoas passes from the pelvic cavity, through this depression or valley, over the femoral head and then to its insertion on the lesser trochanter. This means that there will naturally be some degree of mismatch between the native and prosthetic socket, as the prosthetic cup is completely round, while the native socket has an indentation anteriorly. This may result in relative uncovering of the acetabular cup anteriorly if the psoas valley is naturally deep and this is not considered in the placement of the cup. Kuroda et al8 warned that pre- and intra-operative assessment of the psoas valley is essential to avoid anterior cup prominence relative to the native acetabular bone and subsequent iliopsoas impingement following total hip arthroplasty.

While iliopsoas impingement after total hip arthroplasty is most commonly associated with acetabular cup size and placement, other causes that have been cited include excessive osteophytosis, retained cement, excessively long screws penetrating through the ilium, and a prominent femoral collar9.

Non-operative treatment options described in the scientific literature are primarily pharmacological interventions, either peritendinous injection of glucocorticoids +/- local anaesthetic or non-steroidal anti-inflammatory medication4,9. Non-surgical interventions usually also include physical therapy, with hip flexor stretching the only modality mentioned. No further detail is available regarding physical therapy intervention, but it would appear that there has been no testing of a standardised protocol. While one study reported a complete lack of benefit from non-surgical treatment10, Chalmers et al9 reported a 50% success rate. In the recent systematic review by Shapira and colleagues4, the authors reported that although non-surgical interventions demonstrated improvement, surgical treatment groups showed greater overall improvement.

It is important to note that non-surgical treatment options have been poorly investigated and applied. Hip flexor stretching makes little sense as a treatment strategy for iliopsoas impingement. Stretching will only more firmly impinge the iliopsoas against the uncovered acetabular cup, provoking pain. The limited success achieved is likely only due to injections or medications that may ameliorate the provocation of stretching. However, longer term oral medications are not an ideal option and injection carries the risks of infection and possible damage to the local soft tissues, particularly with repeated corticosteroid injection.

Surgical iliopsoas release (tenotomy) and acetabular component revision are the two general surgical approaches for managing persistent iliopsoas related groin pain following total hip replacement. Various procedures have been described for surgical release or lengthening of the iliopsoas tendon. Surgery may be performed either arthroscopically or open and at the level of the femoral head or at the distal insertion at the lesser trochanter. The level of evidence for intervention studies is currently poor (predominantly Level IV small case studies), with no randomised clinical trials4. A recent systematic review and meta-analysis assessed outcomes from studies that had included Patient Reported Outcome Measures for intervention for Iliopsoas impingement following total hip arthroplasty4. The only Level III study compared acetabular revision to iliopsoas tenotomy, reporting that patients with <8 mm of component prominence experienced mostly good outcomes and resolution of pain with iliopsoas tenotomy, while those with ≥ 8mm of acetabular cup prominence had a high success rate and excellent clinical outcomes with acetabular revision9. However, Shapira et al’s review and meta-analysis of the available literature found that complications of acetabular component revision were more severe and more common - 19.4% vs 3.76% for tenotomy4. These authors then concluded that ‘conservative measures’ should be first line treatment for iliopsoas impingement and tenotomy second line treatment, with revision arthroplasty reserved for recalcitrant cases. In another broader systematic review of iliopsoas release for all indications, not just following total hip arthroplasty, arthroscopic tenotomy was shown reported to have lower complications that open surgery.

Release of the iliopsoas tendon may understandably impact adversely on hip flexor strength and function. No studies have assessed change in strength or physical function following tenotomy for iliopsoas impingement after total hip replacement. Longstaff’s review reported that only one study has used dynamometry to assess hip flexor strength following iliopsoas tenotomy (non-THR population). Brandenburg and colleagues reported a 25% loss of iliopsoas muscle volume measured on MRI and a 19% reduction in seated hip flexion strength, measured with hand-held dynamometry, in patients who had arthroscopic iliopsoas release performed in the context of FAI and/or chondrolabral pathology11. With the growing numbers of younger patients undergoing total hip replacement, these outcomes need to be considered and measured. Many of these patients are having their surgery earlier with the intent of returning to running or other sports, where the iliopsoas plays an important role.

So, there is a challenge here for health professionals in both prevention and management of iliopsoas impingement after total hip replacement. Surgeons need to be very mindful of their cup selection and placement in the first instance. Physiotherapists and other rehabilitative professionals need to carefully consider the application of their treatment protocol and consider whether a stretching protocol is more likely to help or hinder the process of recovery. A load management and exercise program (avoiding stretching) may have a greater chance of success. Until we have evidence available, we must rely on the science available in similar conditions and apply evidence-informed clinical reasoning to optimise our outcomes.

If you've been enjoying the content on this site, you can leave a 5 star review by clicking here. Thanks for your support 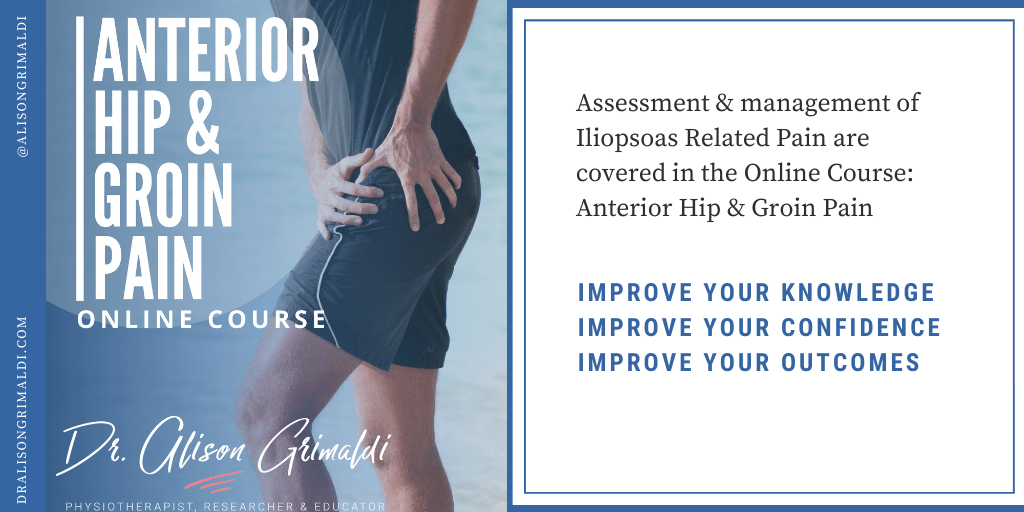