June is Hip Dysplasia Awareness month. You may be aware of dysplasia, but are you seeing the whole picture? Acetabular dysplasia is one of the leading causes of hip instability and painful hip osteoarthritis and therefore awareness and early detection are of high importance. Dysplasia refers to abnormal growth, in this case of the bones of the hip. Variations in shape of the femoral head and neck may develop during childhood and adolescence, predisposing to Femoroacetabular Impingement Syndrome (FAIS). Most commonly though, dysplasia of the hip is used to denote aberrations of shape of the acetabulum. While cam morphology of the femur and associated FAI have been the subject of much attention in recent years, there remains inadequate recognition of acetabular dysplasia with diagnosis often delayed. In an infant, the condition is usually relatively easily addressed by avoiding swaddling of the legs and use of positioning to assist ideal formation of the acetabulum. If the diagnosis is missed until symptoms develop, often in the teens or early 20’s, medical intervention may require major bony reconstructive surgery with accompanying risks.

Even once symptoms present, there may be a delay in diagnosis if there is reliance on simple, traditional 2-dimensional assessments of the 3-dimensional acetabular shape. There are many different measures now available to describe the shape and orientation of the acetabulum, but the most commonly used techniques are still the traditional measurements of Acetabular Index or Roof Angle and the Lateral Centre Edge Angle (LCEA) on an AP X-Ray.

The traditional model of acetabular dysplasia describes 2 types of Dysplasia. Type 1 is where the acetabulum is shallow and the roof of the acetabulum is more upwardly slanted, predisposing to superolateral subluxation of the head of the femur. An acetabular index or roof angle of less than 10° is normal but more than 10-15° is considered dysplastic with higher risks of instability (see graphic above).

In Type 2 dysplasia, the angulation of the roof may be less than 10° but the roof is short, providing less coverage of the femoral head. The Lateral Centre Edge Angle (LCEA) is the angle between a line from the centre of the head of the femur to the lateral edge of the weightbearing surface of the acetabulum and a vertical line (see graphic above). An LCEA of less than 20° is usually considered dysplastic, but as with most definitions, no-one agrees on exactly what is normal and therefore we end up with grey zones usually referred to as borderline dysplasia (LCEA 20-25°). These are still useful quick initial screening measures but if that’s all you look at, then you might not be seeing the whole picture. Those with either anterior or posterior acetabular deficiency and associated instability may present with a normal LCEA and acetabular index. 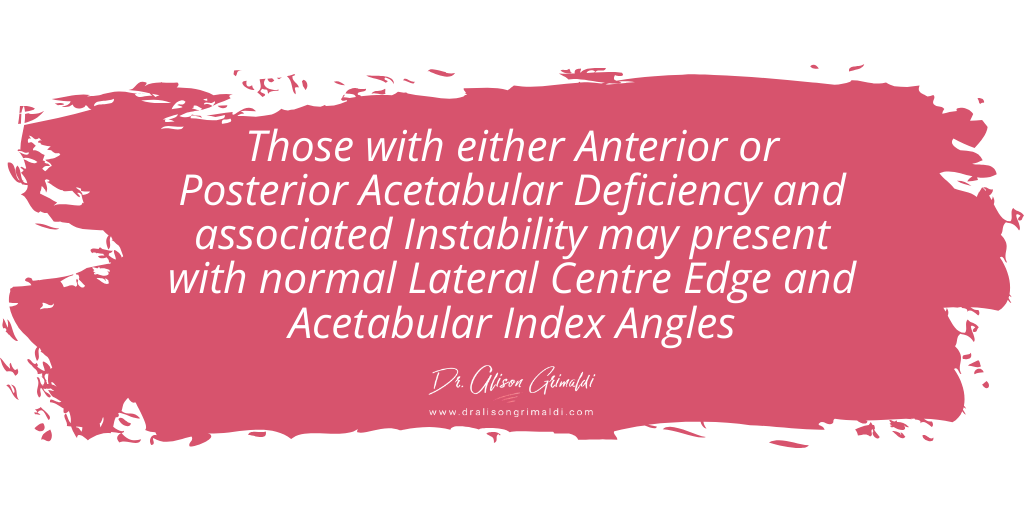 Wilkin and colleagues (2017) proposed a contemporary model for defining acetabular dysplasia and structural instability, denoting 3 classifications – Anterior, Posterior and Lateral or Global Instability1. These definitions denote presentations of structural deficiency of the acetabulum, together with signs and symptoms of instability. In the graphic below, each of these classifications is outlined and graphically displayed to highlight the 3-dimensional nature of acetabular dysplasia.

There are 3 main patterns of acetabular insufficiency or undercoverage of the femoral head:

Posterior instability of the hip joint is less well-recognised than anterior instability, outside the context of major trauma or post-arthroplasty. However, there is rising awareness of low-energy posterior dislocation and the role of bony shape. Posterior acetabular deficiency, despite a normal LCEA, has been reported in young patients investigated following low-energy posterior dislocation4. This bony presentation is usually associated with acetabular retroversion. Acetabular retroversion is recognised as a cause of pincer femoroacetabular impingement (FAI) with impingement anteriorly occurring earlier due to the relative overcoverage of the femoral head. What is not so well recognised is with the anterior overcoverage comes a posterior undercoverage of the femoral head and therefore an increased risk of posterior instability (Figure C). Furthermore, early anterior impingement during flexion or internal rotation associated with either pincer or cam FAI, results in a levering of the head of the femur posteriorly. So, it is important to always consider the possibility of posterior instability in those with pincer &/or cam FAI. 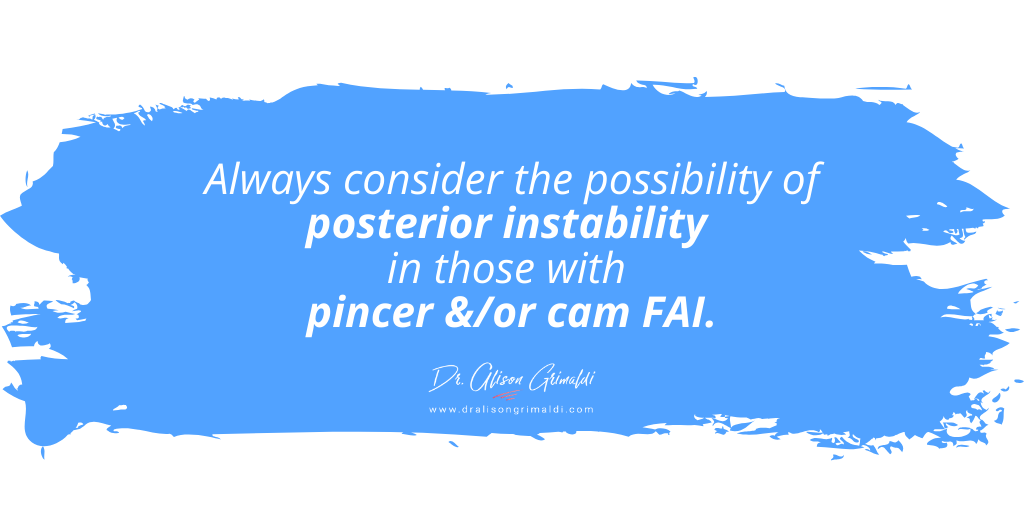 Clinically, patients with posterior instability may present with anterior and/or posterior pain due to the associated anterior impingement. Posterior pain is usually associated with positions or activities that load the posterior joint and/or uncover the femoral head posteriorly – hip flexion, internal rotation, anterior pelvic tilt and forward lean in standing e.g. bending or walking uphill or upstairs. Posterior instability often gives rise to protective increases in posterior muscular co-contraction, which may then irritate adjacent or transiting nerves. Many of these patients go for years being diagnosed with piriformis syndrome, deep gluteal syndrome, SIJ dysfunction1 or lumbar radiculopathy, with elbows and needles in the buttock or persistent stretching only ever providing short term relief. Clinical tests for posterior instability should be performed for anyone presenting with such symptoms. 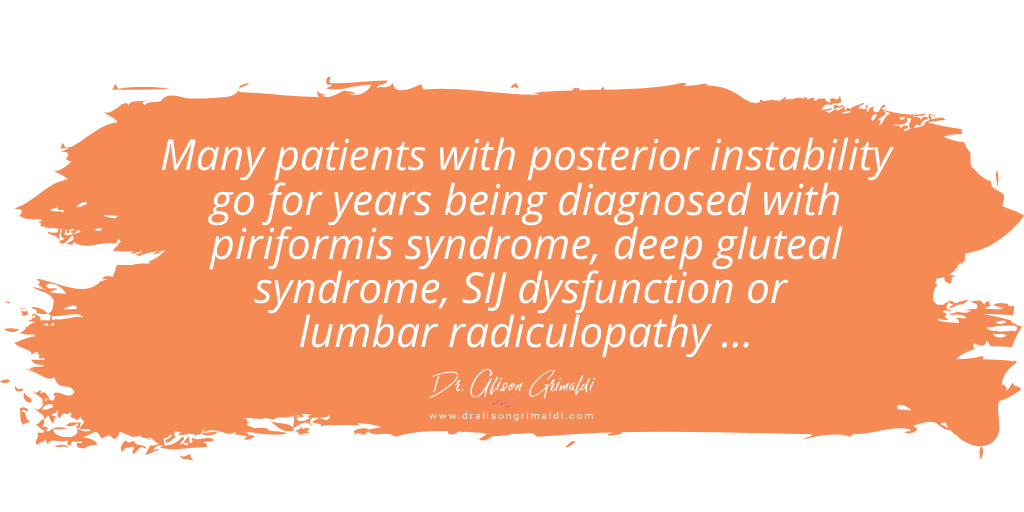 Lateral or global instability (Figure D) is usually associated with ‘classic’ acetabular dysplasia with a LCEA of less than 20° +/- subluxation of the femoral head, with those falling between 20 and 25° categorised as borderline dysplasia1. Wilkin et al suggest that additional anterior and or posterior wall deficiency, and symptoms of static overload (such as pain with prolonged standing) and/or abductor fatigue (such as pain with prolonged walking/jogging), increase suspicion of lateral or global instability1.

Keep in mind that while acetabular dysplasia is a key factor predisposing to instability of the hip joint, other factors also play a role, such as:

I hope this blog helps increase awareness, not just of the presence of acetabular dysplasia but of the three-dimensional nature of acetabular dysplasia. The radiographic features discussed are useful for extracting valuable additional information from a standard AP X-Ray but the image is still only 2 dimensional and for valid interpretation, patient positioning and image quality needs to be ideal. Where warranted, a CT scan will provide a true 3-dimensional representation of acetabular shape and coverage of the femoral head.

To identify cases of hip instability in clinical practice:

Make sure you're seeing the whole picture! 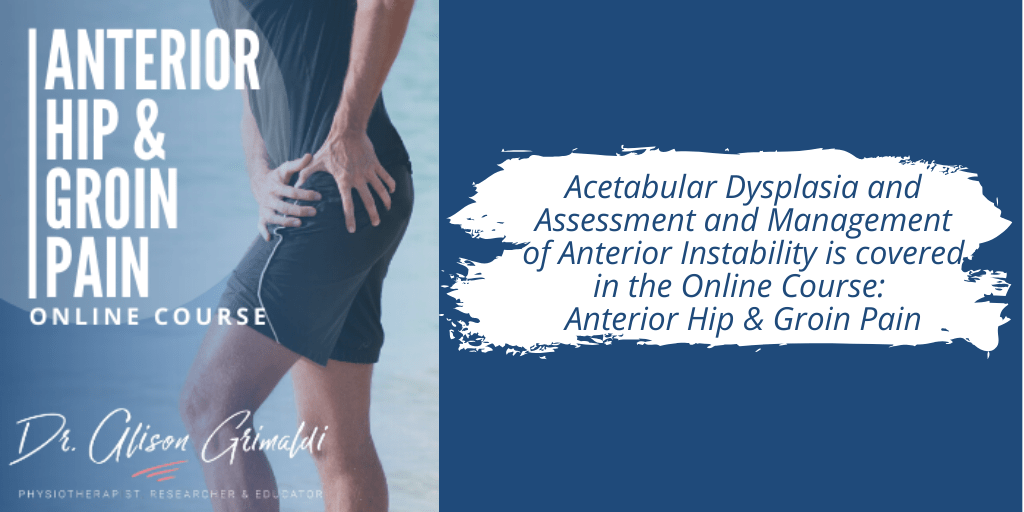 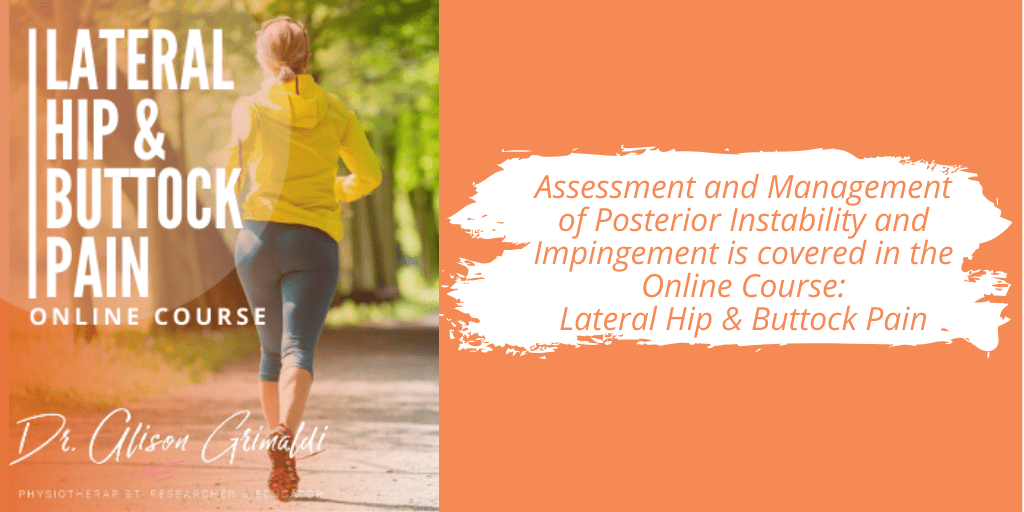